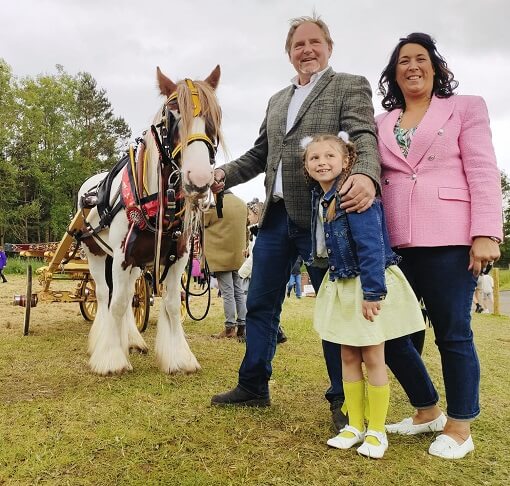 Sixteen ‘Best at Appleby’ welfare awards – organised by Redwings and supported by several National Equine Welfare Council members – were given out for equine health, happiness and horsemanship at this year’s Appleby Horse Fair.

Two Best at Appleby 2022 Champions were announced on Sunday, chosen from the winners and runners up selected by a team of six welfare vets and a Master Harness Maker and Saddlery Fitter in attendance at the Fair.

The criteria included being fit for the work they are doing, bright and relaxed, healthy hooves and microchipped and passported.

The People’s Choice Champion was decided by social media engagements during the event and went to five-year-old stallion Lucifer owned by Carl Blankley and family - with an amazing reach of over 50,000! Carl was spotted by welfare vet and British Veterinary Association Vice President Malcolm Morley on Saturday. Malcolm said: “Carl has been coming to the Fair his whole life, though this was Lucifer’s first Appleby.

“He pulled a wagon a total of 75 miles to get to the Fair without a rub-mark on him and Carl said he is the pride and joy of the family.”

The Vet’s Choice Champion was chosen by the welfare vets at the event and went to skewbald Cob Lucy (pictured above) owned by Matt, Clare and daughter Lolly.

Nicola Berryman, one of Redwings’ Welfare Veterinary Surgeons, who attended, said: “Lucy was one of welfare vet Kaz’ selections and really impressed us all.

“Lucy was beautifully turned out, pulling a stunning dray of very personal significance to her family. Her owner Matt explained to Kaz how the harness might not be his finest but from buckle to breeching fits her perfectly. Daughter Lolly impressed with her level of horse care knowledge and absorbed every word Kaz said. It was clear she’d make a great vet of the future.” 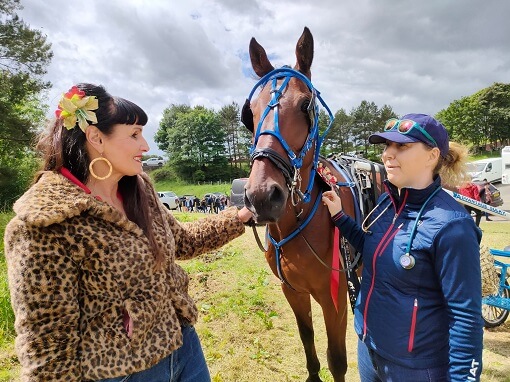 The full list of winners and runners up were:

Anfield the Boss owned by Ross Cordery – Runner Up

It was the 7th Best at Appleby awards – sponsored by the Traditional Gypsy Cob Association, who provided rosettes and membership for winners. The event took place online last year because of Covid. Since 2015 over 60 awards have now been given out. 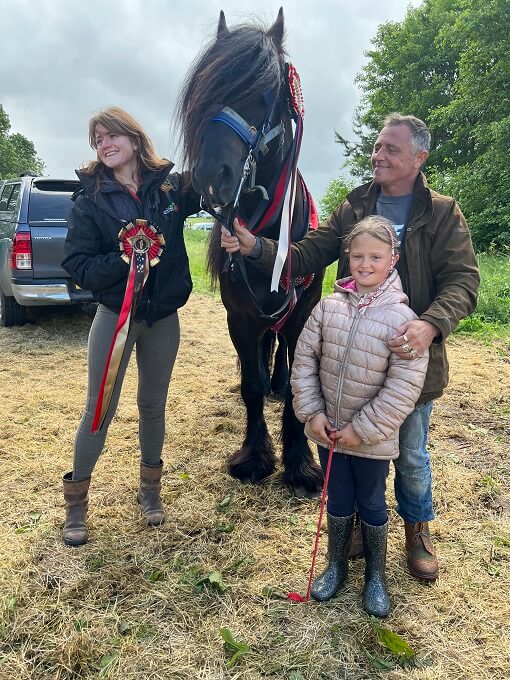 Andie McPherson (pictured above with People's Choice Champion Lucifer and Carl), the Campaigns Manager for Redwings who has been coordinating Best at Appleby since its inception, said: “Best at Appleby provides a unique way of breaking down some of the barriers that sometimes exist between the horse owners at the Fair and vets and equine welfare officers. Vets get to know horse owners who wouldn’t ordinarily speak with them, and the awards provide the opportunity for some energising conversations about horse welfare at the Fair and beyond.

“As well as the vets, the awards have attracted the involvement of Master Harness Maker and Saddlery Fitter, Chris Taylor, and renowned Farriery Educator, Dean Bland AWCF, both issues which are so important to Fairgoers.

“It was fantastic to see how this year’s Best at Appleby awards were being celebrated online and across the Fair and to be able to raise awareness of the horse health, happiness, and good horsemanship criteria virtually and in person. Every one of these conversations puts good horse care in the hearts and minds of Fairgoers and gives winners more reason to take pride in their award.

“This year we had more people approaching us to discuss how they could win and previous winners returning to the stand to show how their horse is doing and help us promote the awards and the important work of the welfare charities attending.”

Each winner and runner-up also received a gift from Horslyx and Ragwort Disk, as well as a weigh tape and body condition scoring chart from Redwings.

Find out more about Best at Appleby and help promote horse welfare at the Fair by liking and following on Facebook and Instagram.

As a charity 100% funded by donations, it is thanks to the generosity of its supporters that Redwings is able to do its important work to promote the welfare of horses, ponies, donkeys and mules.