New study on the effects of antibiotics in horses with strangles 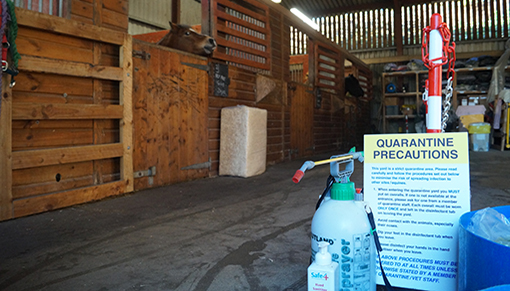 Recent research sheds scientific light on the long suspected link between the use of antibiotics in horses with strangles and their immunity to reinfection with the disease.

Strangles is caused by a bacteria (rather than a virus) and bacterial infections are usually treated with antibiotics. However, in recent years there has been growing concern among vets and researchers that prescribing antibiotics in strangles cases may not routinely benefit the infected horse. In addition, there have been suggestions that antibiotics may in fact have the potential to prolong the course of the disease, increase the risk of disease complications and reduce the horse’s immunity to strangles after their recovery.

At the moment, there is little scientific evidence to support or disprove these concerns, but a recent study has made an important link between antibiotic treatment and reduced immunity in horses with strangles.

An outbreak involving 41 horses in Sweden led the attending vet to treat some horses with penicillin in the early stages of their infection, some at a later point, while others didn’t receive antibiotics, depending on their symptoms. This gave researchers the perfect opportunity to compare activity in the immune systems of horses who had been treated with antibiotics at an early stage, later stage or not at all.

The study found that while, as expected, there was variation in the number of antibodies being produced by each individual’s immune system, in general, horses who were treated earlier with antibiotics (up to 11 days after the onset of fever) had a noticeable drop in the protection offered by their immune systems much sooner than the other horses (59% at four months after initial becoming infected, compared to 100% and 93% in the other two groups).

Interestingly, the clinical signs of disease in all 41 horses were also monitored by researchers. They found that, overall, horses treated with antibiotics had similarly severe symptoms of strangles as horses who had not received antibiotics.

Lead researcher on the study, Professor John Pringle, told us: “Essentially, this work stemmed from the underlying concept in strangles that early treatment with antibiotics would impair development of immunity. However, apart from a single case outbreak in the ‘80s the veterinary community lacked more solid evidence. This herd outbreak, as part of our larger research program into combatting strangles serendipitously provided a unique opportunity to examine immunity in the face of early antibiotics. The results were not at all surprising.  But now veterinarians have much stronger documentation to support their efforts to restrict antibiotics in clinical  strangles to only those  in severe need.”

The study's findings align with a move away from routinely prescribing antibiotics for all horses with strangles, though the drugs remain an important, and possibly life-saving treatment option for horses with severe or persistent symptoms of disease.

Redwings’ vets do not routinely prescribe antibiotics to new horses that are found to have the disease. Between 2011 and 2016, of the 20 horses showing active signs of strangles while at our quarantine centre for new arrivals, four were treated with antibiotics. Two were youngsters who developed disease complications, and two were foals struggling with the severity of their symptoms.

Strangles carriers (apparently healthy horses with strangles bacteria hidden in their respiratory system) are also regularly found among new arrivals at Redwings and treated successfully without use of antibiotics.

For more information, download a summary of our carrier treatment protocol here.