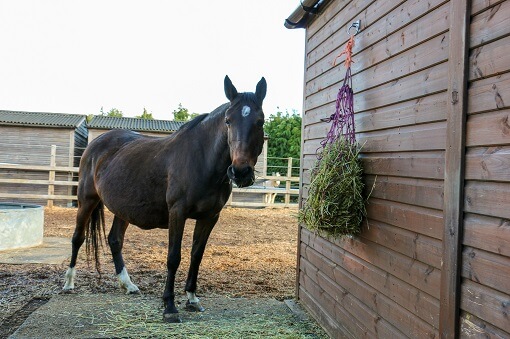 A pregnant mare who was involved in a road traffic accident at Tilbury Docks in Essex has arrived at Redwings in Norfolk where she’s getting all the tender loving care she needs.

Bay mare Majesty – as she’s been named in honour of the Queen’s Jubilee year – suffered serious injuries after being hit by a vehicle on the 10th November.

She came into our care on Friday (25th February) and is settling in well.

Jo Franklin, Redwings Senior Field Officer, said: “Majesty was found stuck in some railings on the central reservation when the emergency services arrived, and was in a pretty terrible state.

“She had sustained a broken nose and chest injuries and needed immediate veterinary attention.

“She’s been in the care of a private boarding establishment since the accident happened, who have done a great job looking after her during her recovery this far.

“Not only is Majesty in foal, which means she needs extra special care, she is also quite nervous. Though she has improved a lot already thanks to the work of those caring for her, her injuries mean, understandably, she’s quite head shy when having a headcollar put on and will need ongoing support from our specialist behaviour team.”

Hackney-type Majesty is 14.1hh and her microchip shows that she is 11 years old. Unfortunately, her owner’s details were not registered so they have not been able to be identified.

“Majesty’s foal will be born in Redwings’ care. She’s been through an awful lot so nothing is guaranteed but we really hope we’ll be able to share some good news in the near future,” said Jo.

As a charity 100% funded by donations, it is thanks to the generosity of our supporters that we are able to take in and care for horses like Majesty.

You can support Majesty’s ongoing care and the care of horses like her by texting REDWINGS 10 to 70085 to donate £10 (texts cost the donation amount plus one standard rate message), calling 01508 505246 or visiting www.redwings.org.uk/donate