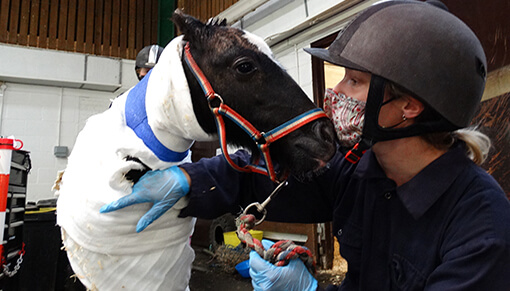 When Phoenix took his first tentative steps off our horse box last week, we knew this little foal was special.

Having been severely burned down one whole side of his body in a suspected arson attack, he was covered head to hoof in protective and healing bandages.

Yet despite the discomfort he must have been in and the strangeness of his new surroundings, this plucky seven-week-old youngster gladly followed his new carers into his new home at the Redwings Horse Hospital (even stopping to meet his next door neighbour Mildred on the way) where he will now spend the foreseeable future recovering from his horrific ordeal.

Over this week, that little spark we saw on day one has continued to grow and, while the extent of his injuries means we still can’t be certain of his prognosis, his apparent desire to live and be a normal foal fills our hearts with so much hope.

And talking of hearts – he’s not just stolen those of our vets and nurses, but it seems thousands of people across the world!

Within 24 hours of announcing his arrival at Redwings on our social media channels, kind supporters had donated nearly £20,000 in support of our Horse Hospital and his care, and one million people had seen his story online!

By last weekend, he had appeared in a number of regional and national publications, including The Sun. He’s even made an appearance in the Australian press!

A few days later we launched an Amazon Wishlist full of essential items, such as bandages, gauze, gloves and milk powder, all of which our vet team is using every day to provide Phoenix with the lifesaving care he needs.

It sold out within two hours!

In fact, we had so many items arriving all at once that our vets had to run their cars around to our reception desk and fill up their boots to get it all back to the hospital as there was no way they could carry it all! 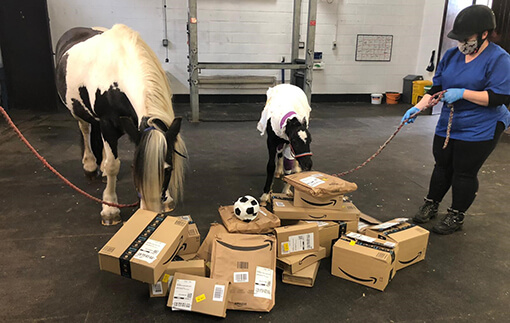 As well as donations and gifts, the Horse Hospital has also been inundated with many heartfelt hand-written cards, thanking our vets for their dedication and wishing Phoenix all the best in his recovery.

Long story short, we’ve been absolutely blown away by the unprecedented support he has received since his arrival and we can’t thank everyone enough – whether you’ve made a donation, bought our vet team a much-needed gift or simply sent in your best wishes. Every comment is read and appreciated.

While we’ve been happy with Phoenix’s progress so far, we must emphasise that he has a very long way to go and is not out of the woods yet.

Because of his young age and the severity of his injuries, his immune system is under-developed which makes him very vulnerable to infection which could sadly prove fatal.

This is why he currently remains in an isolation area, right in the middle of the Horse Hospital, and only a small handful of care staff are coming in close contact with him. And even when they do, they’re properly clothed in quarantine overalls and gloves, and make sure to carefully disinfect any equipment that’s been inside the isolation area – including their boots and hats!

Take a look at the video below to see an overview of this care at our Horse Hospital so far.

But don’t worry – he’s not by himself. Not only is he being showered with affection by our team (and we hear he adores a cuddle!) and has the company of his trusty teddy bear George (kindly donated by Lingfield Equine Vets who provided him with initial emergency care on our behalf), but he is being joined by Mildred – the pony we mentioned at the start of the blog.

Mildred is a lovely mare who is a permanent resident at the Sanctuary and often takes abandoned or orphaned foals under her caring hoof. Prior to Phoenix’s arrival, she was brought into the next door stable within the Hospital so she could be there to greet him and provide him with that horsey companionship that we simply can’t give him.

What with all his intensive daily treatments (which include his bandages having to be replaced every day which takes an hour and a half each time!), they haven’t had much opportunity to bond properly but we hope, as he becomes stronger in time, they’ll be able to enjoy some turnout together and she’ll become his foster mum.

Sadly, the whereabouts of Phoenix’s mum remain unknown but we hope he’ll find all the love he needs from his carers, Mildred and the other horses at the Sanctuary.

For further updates about Phoenix please continue to check in on our social media pages or pop back to our website next week when we’ll be publishing our next blog on his treatment and progress.

In the meantime, if you’d like to continue supporting our Horse Hospital in the work it does to care for seriously ill horses, like Phoenix, please click here or call 01508 481000.