Every horse or pony is unique, with different needs and preferences for diet, exercise and lifestyle according to their age, breed, gender, temperament, condition and life experiences.

Understanding these needs is important when caring for any horse, but for those who’ve become sick, injured or out of shape, that knowledge is a valuable tool in choosing the right treatment to support recovery.

In almost every case, recovery relies on a combination of nurture and nourishment and two organisations who specialise in providing just that are Redwings Horse Sanctuary and SPILLERS®, the equine nutrition experts.

For more than 30 years, Redwings’ dedicated team have worked tirelessly to determine what the rescued horses and ponies in their care need, and developed individual diet plans that capitalise on SPILLERS® know-how to meet those needs and restore health and vitality. 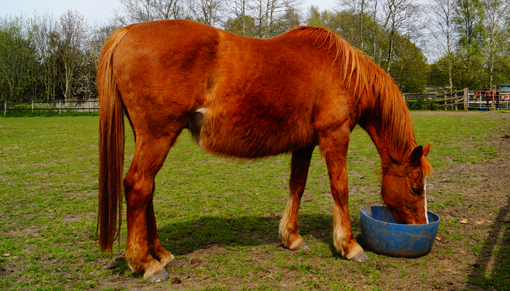 Redwings took on the care of Ned, a 27-year-old TBx, from another equine charity in Wales.

For his age, Ned was in reasonable shape. His teeth were good and he was keen to socialise with other horses. However, with an official diagnosis of Cushing’s Disease (PPID), Ned was, and will remain, vulnerable to hormonal imbalances and health problems like laminitis for the rest of his life.

While Peroglide medication is used to keep his PPID in check, his overall health is maintained with a carefully planned and managed diet. This includes a reduced ration of SPILLERS® Conditioning Cubes fed in combination with SPILLERS® High Fibre Cubes. His turnout area is restricted in the spring when the natural sugar content of pasture grass is at its highest.

SPILLERS® Tip: Horses and ponies with Cushing’s should be managed on a high fibre, low starch and low sugar diet . SPILLERS RESPONSE® Slow Release Energy Cubes can often provide a sympathetic alternative to traditional conditioning feeds but always seek advice from a nutritionist before changing your horse or pony’s feed. 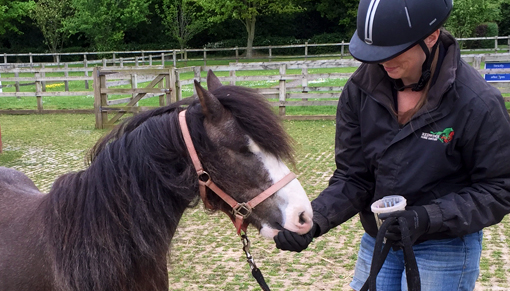 Cauli was rescued by Redwings after being found abandoned in a cauliflower field standing next to her dead companion at the age of four. She was dangerously underweight and had developed an eye infection so severe that it had to be surgically removed.

She needed a lot of physical and emotional support to regain her health but now, eight years later, Cauli is a much-loved, permanent Adoption Star resident at Redwings Caldecott.

However, despite receiving quality care and maintaining a healthy weight and condition, Cauli has been diagnosed with Equine Metabolic Syndrome (EMS) following recurring bouts of laminitis. Maintaining her weight to keep the excess pounds off is a challenge but it’s one that the team at Redwings are meeting head on with a controlled diet.

Cauli doesn’t need to lose weight so she’s given 2% of her bodyweight in daily forage, but because she gains weight easily, her turnout time is limited and she’s given 200g of SPILLERS® Original Balancer each day to make sure she gets all the nutrients she needs without extra calories. 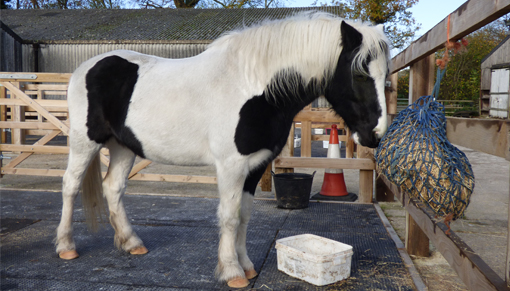 Eight-year-old Bango arrived at Redwings last year in a sorry state. Carrying excessive weight, he was at the top of the Body Condition scale and consequently suffering from acute laminitis, which caused him considerable pain.

That was 12 months ago and now, Bango is a much happier, healthier chap. Sadly, his laminitis had progressed so far that his feet will never fully recover but thanks to the combination of intensive care given by a vet and farrier and a diet managed by Redwings, his condition is now manageable.

For the first couple of months, Bango needed box rest to give his feet time to heal. During that time, he was given reduced forage rations of 1.5% his bodyweight, plus a scoop of chaff and SPILLERS® High Fibre Cubes to give him some variety, and to give the team something to hide his laminitis medication in!

With just a few more pounds to shed, Bango now enjoys short turnouts and socialising with his new friend Khan at Redwings Ada Cole, and he eats 4.5kg of netted hay with 300g of SPILLERS® Original Balancer each day to give him the exercise, calories and essential nutrients necessary for his physical and psychological health.

SPILLERS® Tip: When fed at the recommended ration, balancers provide a concentrated source of vitamins, minerals and quality protein, alongside a negligible level of calories, making the ideal choice even for very overweight horses and ponies.