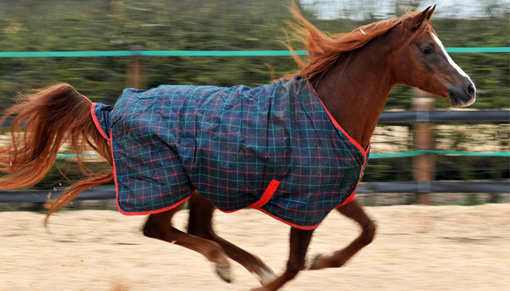 A horse has been secured a permanent home at Redwings after his owners were convicted of numerous animal welfare offences.

On Thursday 2nd October 2014, David Bickell was sentenced to a four-month prison sentence and given a 15-year ban from keeping all animals having previously pleaded guilty to a number of offences under the Animal Welfare Act. His son, William Bickell, who is 17, received a six-month referral order and was asked to pay £100 in costs.

The pair admitted to causing unnecessary suffering to animals kept at their Norfolk-based farm and among the neglected animals found by Trading Standards officers – which ranged from pigs and cattle, to dogs, horses and donkeys – was an Arab stallion called Aslan.

Aslan, together with a mare called Beauty, was discovered in an emaciated state and living in appalling conditions – indeed the body of a dead horse was found left in a muck heap to rot. Six-year old Aslan was subsequently seized from the farm on the 16th December 2013 and brought to Redwings. The other animals seized were taken in by the RSPCA, World Horse Welfare and the Donkey Sanctuary.

Here, he received rigorous veterinary treatment, including that for strangles – an aggressive respiratory bacterial infection. For more information and advice about strangles, click here to view our information pack.

Since his rescue, Aslan has made a fantastic recovery and, as the case has now been concluded, the Redwings vet team will at last be able to carry out a castration operation which will enable him to live out happily with other horses at the Sanctuary.

Commenting on the prosecution of David and William Bickell, Redwings Senior Field Officer Julie Harding said: “We are very pleased that justice has been done for Aslan and the animals found at the Bickells’ farm. Aslan’s case is incredibly saddening, but he has come on leaps and bounds since arriving at Redwings, and we are encouraged that his neglect has not gone unpunished. The jail sentence in particular sends out a clear message that there is no excuse for subjecting your animals to this kind of neglect”.