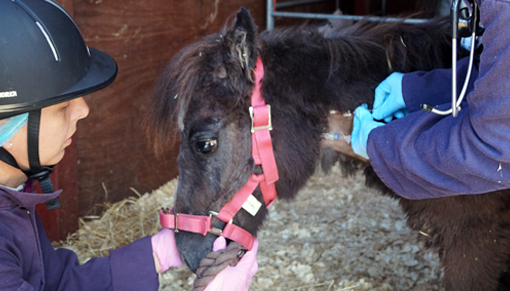 Since his rescue in June, Arthur’s battle for survival has been turbulent to say the least.

Following his sudden downturn on 30th June where he was given just a 10% chance of survival, he initially began to respond well to treatment. His digestive system has been ravaged by worms, but gradually he became stronger and stronger, and was even able to get up from lying down without support from our care team.

However, during the second week of July although bright he had a high temperature and a suspected infection. As well as antibiotics, Arthur required a further blood plasma transfusion to help his immune system.

Despite Arthur’s rocky recovery, our welfare vet Nicola Berryman – who has never given up on this feisty young chap – believes he has a good chance of survival. Nonetheless, he needs a great deal of veterinary support on an ongoing basis and we anticipate it will be a lengthy process with many more ups and downs to come.

“Arthur is again responding well to treatment and he has a lot of fight in him,” commented Nicola. “He’s also made great strides in his confidence around people. He is only around six to eight months old and was completely feral when rescued; he was terrified when we first had to lift him. But now he is really friendly, loves people and really enjoys the daily exercise he gets with our vet nurses – he even managed a little trot, which was lovely to see.

“Arthur has also just had a haircut to help keep him cool during this warm weather, which he took completely in his stride. What a brave boy he’s been!”

Help us care for Arthur and his friends