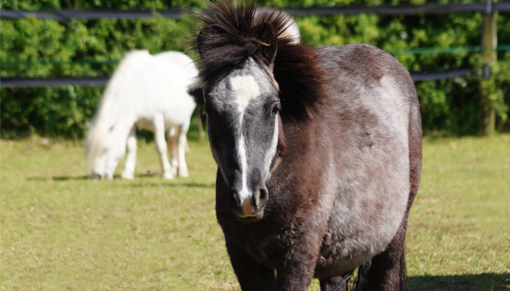 Little Arthur, nicknamed “miracle pony” by our welfare vet Nicola Berryman, is one of seven ponies removed from Bodmin Moor in June 2016 that were found in an emaciated state and suffering from severe worm burdens.

Last spring, native ponies on certain areas of the Moor had been finding life extremely challenging due to relentless poor weather that had affected their grazing. This, coupled with overstocking due to indiscriminate breeding and some owners seeing the Moor as a dumping ground for unwanted ponies, had simply led to too many horses trying to live off the land.

Without help, Arthur and his six companions – named Dozmary, Blisland, Helland, Long Tom, Newell and Temple after points of interest on the Moor – would not have survived.

Not long after arriving at the Sanctuary, poor Arthur – who was thought to be between six and eight months old at the time – took a sudden downturn and was rushed to our Horse Hospital.

As well as antibiotics, he received blood and plasma transfusions to boost his immune system but he was so weak he had to be manually lifted day and night by dedicated members of the vet team who stayed by his side 24/7. 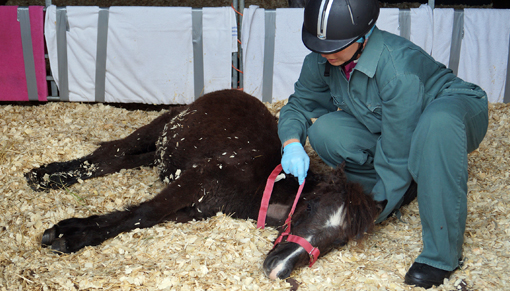 Despite being given just a 10% chance of survival, little battler Arthur fought back to health and miraculously was strong enough to rejoin his friends just six weeks later (watch their reunion video here). Although, physically this characterful group have recovered from the hardships of their previous life, they still have a long way to go in trusting human contact.

Having had little contact with humans before arriving at Redwings, all seven ponies undergo regular handling training by our behaviour team to help them feel less nervous and to ensure essential health checks and farriery visits can be carried out.

Welfare vet Nicola, who led Arthur’s care, said: “I called Arthur my “miracle pony” because there were a couple of times when I thought we were going to lose him, but despite being incredibly ill he had this feistiness about him which made me think he could pull through.

“Looking at him and his friends now, you wouldn’t think they were the same of group of ponies we rescued back in June last year. And although their training is ongoing, they’ve come such a long way. Some of them now happily enjoy a nice cuddle and a scratch, and will inquisitively trot up to the fence to say hello – especially Arthur!

“You can’t help but smile when you see them, and Arthur has become the sweetest little pony. He will always have a special place in my heart.”

Our work to secure the future welfare of ponies on Bodmin Moor continues. We have been actively working with the Bodmin Moor Commons Council for many years to put in place effective and sustainable changes; indeed, Arthur’s rescue was the second of three welfare operations on Bodmin Moor in 2016.

Last September also saw an ambitious multi-agency project to round-up, passport and microchip 160 ponies to formally identify those that had the right to graze on East Moor. This collaborative project led to a dramatic reduction in the numbers of ponies being grazed on East Moor, and subsequently visibly improved grazing. As a result there were no welfare cases on the Moor over the winter of 2016/7, which is a dramatic change from previous years.

These initiatives, rescues and the ongoing specialist veterinary care and handling training for ponies just like Arthur are completely funded by donations from kind supporters like you!

To support our ongoing work to help and protect horses in need, please donate below:

Thank you for helping us rescue ponies like Arthur