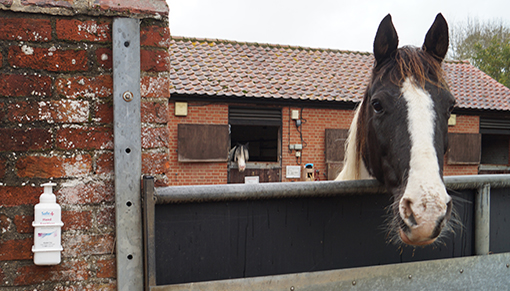 In 2018, as part of our award-winning Stamp Out Strangles campaign, we surveyed a small sample of livery yards (26) to find out if and how they protect themselves from infectious disease.

Yards that are home to multiple horses are particularly vulnerable to disease outbreaks, which can be devastating for businesses, as well as a miserable time for infected horses and their owners. Newly-arrived horses are a common way for strangles to find its way onto a yard, and our survey wanted to find out what steps yards are taking to reduce the risk of disease from new horses.

Frequency of quarantine or testing for new arrivals

Of 22 yards around the UK who told us whether or not they screen (quarantine and/or test) new horses for strangles, 15 (68%) told us that they do.

This statistic contrasts markedly with findings from Redwings’ 2016 horse owner strangles survey where only 13% of respondents who kept their horse on a yard said new arrivals were screened for strangles. Although we need to do more work to explore this difference, it could be an early indication that the number of yards who screen new horses for strangles is increasing.

We have also seen a positive response to our new Stamp Out Strangles pledge, which has already seen more than 100 yard managers committing to screening and better biosecurity in the first three months.

Of the seven yards who said they didn’t screen for strangles, reasons given included cost (two yards) and not having had a problem with strangles in the past (two yards).

The survey made it clear that the term ‘screening’ is interpreted in different ways. While almost a third of yards (32%) said they did not screen new horses, when asked what protocols are used for new horses, only one yard told us they turned horses straight out without any quarantine or testing. This suggests ‘screening’ is associated with testing horses, rather than a quarantine-only approach. This also reflects Redwings use of the term ‘screening’ to define testing in addition to quarantine.

Although quarantine helps protect a yard from new horses that are incubating recent strangles infection or in the recovery phase of the disease, only testing will identify strangles carriers and enable them to be treated. This is why Redwings recommends using quarantine AND screening to provide the highest level of confidence that new horses are not bringing infection onto a yard. It would be useful to work towards a more consistent use of the word ‘screening’ across the equestrian sector to help with communication around strangles prevention and outbreak management.

Although a small sample, our survey suggests that screening approaches can vary widely between individual yards. Keeping new horses in quarantine without carrying out veterinary tests was the most popular approach, used by 10 out of 23 yards (46%). Eight yards (37%) required blood tests; five yards asked for blood testing before a horse is moved and allow the horse to come onto the yard without quarantine if the test is clear, while three yards asked for the horse to undergo blood tests while in quarantine after their arrival.

Two yards told us they adapted their screening protocol depending on whether the horse is known to them and where it is travelling from. All screening is useful, but we recommend testing all horses routinely. This is because Redwings’ own experience has shown that strangles carriers can be found among horses whose history suggests they are very low risk.

The time a new horse spends in quarantine also varies considerably in our sample, from less than a week to one month. Most yards (60%) required new horses to spend one to two weeks in quarantine. This is likely to reflect the fact that two weeks was the advised minimum quarantine period until around 2016, when new evidence suggested some horses took longer than this to show signs of infection, meaning three weeks is now the minimum recommended.

In addition to screening for strangles, five yards who took part in the study also mentioned without being asked that new horses are asked to submit a worm egg count or be routinely wormed while in quarantine, emphasising the value of quarantine in helping to protect horses from health issues other than strangles.

Half of yards use a written protocol to help them prevent or manage infectious disease. Of those that didn’t have written guidelines, six said they communicated verbally with their clients, often commenting that they felt this was adequate.

Additional information on client communication included using group text messages to explain biosecurity requirements if strangles was known to be in the local area, and working with vets to put a plan in place in the case of an outbreak on the yard. One respondent preferred verbal discussion as many of her liveries were first-time horse owners who did not always have a clear understanding of strangles.

The role of vets

The importance of veterinary support in relation to infectious disease and biosecurity was highlighted among the yards surveyed. Of 22 yards who had sought information on strangles, 16 (73%) had turned to their vet for advice. Internet searches were carried out by 12 yards (55%). This picture was not greatly affected by looking at whether or not a yard had experience of strangles, as of those yards that had not had an outbreak, 69% had spoken to their vet for advice.

The survey was conducted by Redwings Field Officers and members of our volunteer network. Yards were selected at random through internet searches and existing local knowledge so that there was the possibility of visiting in person was an option.

Yard size was varied, with the number of resident horses ranging from 11 to just over 100, the average being 34 horses. When asked whether the yard had experienced a strangles outbreak, 11 out of 24 yards said they had, one of which was within the last 12 months. Thirteen yards said they had not had an outbreak.

For more information on yard screening and to download a free draft protocol to adapt, go to the advice pages of our Strangles Hub.

To support the campaign and help protect more horses from infectious disease take the #StampOutStrangles pledge.