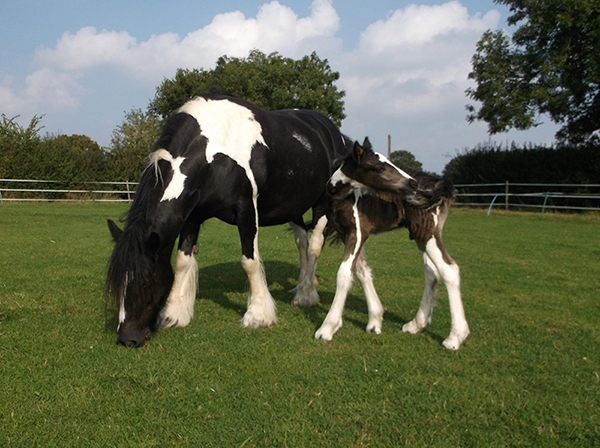 A man from Harlow, Essex, has pleaded guilty to offences under the Animal Welfare Act relating to the neglect of the pregnant mare.

On Monday 20th July 2015, an 18-year-old man admitted neglecting the piebald cob cross by failing to address her weight loss and poor body condition, not providing veterinary care for treatment of wounds on her back and not providing basic care such as a suitable environment, fresh drinking water or maintaining her hooves. Subsequently, he was disqualified from keeping horses for five years, given a 12 month community order involving 180 hours unpaid work, and made to pay £1,200 in costs.

In December 2013, the RSPCA received a call concerning a tethered horse on Harlow Common; she had no water, hay and was in a very poor condition. Despite the RSPCA’s advice to improve her care, Twiglet’s condition worsened until she was found by our Senior Field Officer Jo Franklin in a worryingly emaciated state and so was seized by the police on welfare grounds.

“Twiglet was in extremely poor condition when we found her. In fact she was so thin that we had no idea she was actually pregnant,” commented Jo. “Thank goodness we got to her when we did as she would never have had the nutrition she needed if we had left her where she was. She was brought to Redwings and in the September she gave birth to a healthy foal who we named Frazzle. Both mare and foal are now doing really well in our care. Thanks so much to the RSPCA for bringing justice in this case.”

Following the judgment an RSPCA inspector said: “Her most basic needs had simply not been taken care of - she was living in completely unsuitable conditions without food or water. She was given the name Twiglet because she so hungry when she was found, that she was eating a branch - the only food she could find”.