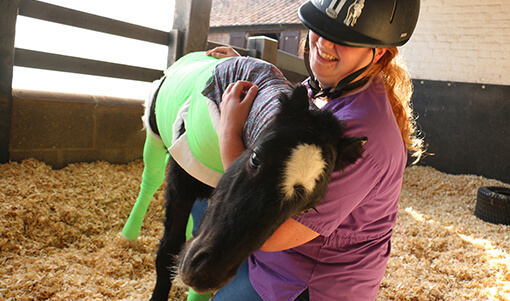 Redwings Phoenix has been named Pony of the Year at the prestigious Horse & Hound Awards.

Phoenix came to the Sanctuary in August at just seven weeks old having suffered horrific burns down one whole side of his body in a suspected arson attack.

His story captured the hearts of thousands across the world and we were inundated with donations, gifts and well wishes in support of his recovery.

Despite the best efforts of our incredible vet team, who gave Phoenix 24-hour care for over two months, he very sadly passed away in October.

However, having already been nominated for the Pony of the Year Award (sponsored by Stallion AI) by members of the public, Horse & Hound kindly decided to keep Phoenix’s name on the shortlist as a tribute to his bravery and the hard work of Redwings’ teams to help horses in need.

Last night (1st December), following a public vote, Phoenix was honoured with the award at a ceremony, attended by our Chief Executive Lynn Cutress and Head of Veterinary Services Nicky Jarvis.

Among the other winners on the night were Olympic gold-winning pair Ben Maher and Explosion W (the latter being named Horse of the Year) and international event rider Tom McEwen.

Lynn said: “We are truly honoured that the public voted for Phoenix to receive this award. This really is a wonderful way to remember this very special little pony who is very much missed, and pay tribute to our dedicated team at Redwings who worked tirelessly for months to try and help him recover from his horrific ordeal.

“To see Phoenix recognised in this way among some of the country’s top sports horses, equestrians and equine professionals shows just how much his story touched people’s hearts across the world, which we hope will serve as a poignant reminder to everyone of the importance of treating all animals with the respect and care they deserve.

“With the help of our supporters, we will certainly do all we can at Redwings to continue offering specialist care to neglected and abused horses as a lasting legacy to Phoenix’s bravery and courage.”

Thank you to everyone who voted for Phoenix, and those who donated towards his care and in his memory since he passed away.

Your support plays a vital role in helping us deal with emergencies and carry out intensive care, day after day. Sadly, not every patient will pull through but your donations help us give them the chance they deserve to survive.