Helping the horses of Bodmin Moor 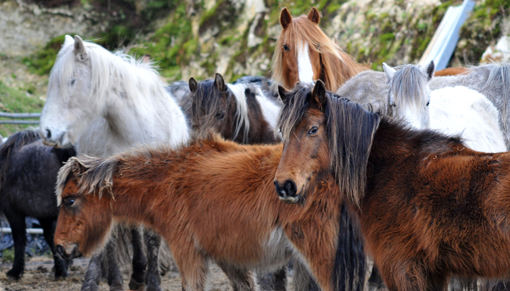 Redwings Horse Sanctuary assists multi-agency operation to round up 34 horses from the Moor.

On Thursday 7th April, Redwings assisted the Bodmin Moor Commons Council in a multi-agency operation to round up, assess and rescue a group of horses that were causing concern on Eastmoor, Bodmin Moor, Cornwall. The one day operation – involving Redwings, the RSPCA, the Animal and Plant Health Agency (APHA), World Horse Welfare, local rescue organisations including Shires Holt, Adamsfield Equine and Bodmin Moorland Pony Rehabilitation, local landowners and the police – was arranged to tackle the escalating problem of ill and suffering ponies on sections of the Moor; a situation exacerbated by the recent wet winter.

A group of 34 horses were rounded up to be assessed by our Head of Welfare and Behaviour and Senior Veterinary Surgeon Nic de Brauwere and APHA Veterinary Officer Lorna Stevenson, 22 of which were of sufficient concern to be removed from the Moor and rehomed to local rescue centres Shires Holt, Adamsfield Equine and Bodmin Moorland Pony Rehabilitation, as well as welfare charity Bransby Horses and other local shelters. Another pony suffering from a disfigured foot was sadly euthanased, while the remainder of the group that were judged to be healthy were released back on to the Moor, but will be monitored on an ongoing basis.

“It is clear there is a big challenge in bringing about long-term improvements for the management of ponies on Bodmin Moor,” reflected Nic, who has been supporting welfare work on the Moor for many years. “The Moor has the potential for native ponies to thrive, but these animals will always need human support – whether that be to compensate for limited grazing as a result of severe weather, ensure parasite and infectious disease control or attending to unexpected problems such as injury or illness.

“Indeed, our hope for the future of the ponies of Bodmin Moor is for them to have a natural life, but also to be familiarised with people so they can be supported with veterinary and routine healthcare when required. We also believe the balance of stallions and mares needs to be urgently addressed on the Moor.

“This vision can only become a reality with the cooperation of everyone with rights to graze their ponies on the Moor, and this is why we fully support the newly established Bodmin Moor Commons Council and their development of management plans that work for the commoners, the land and the animals.”

We have been working to help the horses of Bodmin Moor for more than five years having rescued and offered a home at the Sanctuary to 19 ponies found in a severe state of neglect in 2011. Similarly, exactly one year ago, we supported the rescue and ongoing care of a stallion and a mare and her foal, who were named after characters from the popular BBC television series Poldark having been rescued from the very spot where scenes from the programme were filmed.

One year on from the rescue of the Poldark ponies, real strides have been made for ensuring the safe future of the Moor’s equine population, including the establishment of the Bodmin Moor Commons Council on 1st March 2016 – something that Redwings has been championing throughout.

“We fully support the Council’s plans for long term change for the regulation of the Moor and in the interim will continue to offer help to the ponies in need,” continued Nic. “Identifying owners and those with rights to graze is the primary challenge faced by the Council. It is a UK-wide problem that despite passport and microchipping legislation, equine identification is not being enforced rendering it impossible to bring irresponsible owners to account.

“Bodmin Moor should not be seen as an area for abandoning or fly-grazing horses, and owners who allow their horses to fall into the terrible state of neglect that we have seen as a charity first-hand and as recently reported should face the consequences under the Animal Welfare Act.”

Commenting on the round up APHA Veterinary Officer Lorna Stevenson said: “I would like to thank all involved for their support and hard work making this complex and challenging operation a success. Since 7th April, Julie Dowton of Bodmin Moor Commons Council and Pip Lovelock from Shires Holt have been out on the moors daily and have identified more ponies in three locations that require removal and rehoming, and APHA will be accompanying them on further visits this week.”