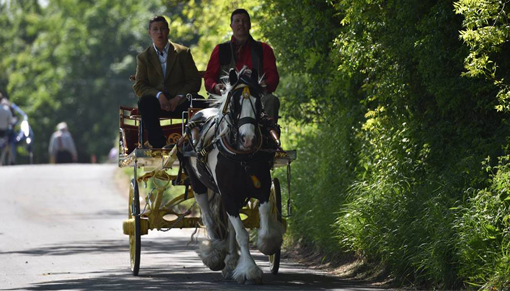 Redwings has been instrumental in ensuring the health and happiness of horses at Europe’s largest horse fair for over a decade. Here’s how:

Redwings’ vets and field officers have become a part of the scenery at Appleby Horse Fair. The historic event has attracted thousands of Gypsies and Travellers with their horses for centuries, and the tradition of trading and enjoying horses makes Appleby an important cultural event.

Increasingly, horses are being brought to the Fair for leisure rather than for trade and the vast majority are there as part of a traditional family holiday. Hundreds of horses are seen over the three days being driven and ridden around the town, washed in the river and exercised to show them off to onlookers.

Our service at the Fair

We have been attending the Appleby Horse Fair for over 10 years and as part of an RSPCA led project, our vets provide a vital service to fair-goers including emergency veterinary treatment and health advice as well as  providing support to RSPCA officers in assessing the needs of animals who may be injured, stray or abandoned.

Over the years the work of the RSPCA, with the support of Redwings and other welfare charities, has led to safer swimming areas for horses, reduced obstruction for horses pulling heavy caravans and the removal of horses when needed in response to breaches of animal welfare legislation. And the presence of the RSPCA and welfare organisations is increasingly embraced by fair-goers as part of the event.

With high numbers of horses in attendance, changeable weather conditions and increasing popularity of new visitors every year, the Fair environment can pose a risk to horses. Our vets focus on offering emergency treatment and, importantly, being a source of impartial advice to owners. Meanwhile, we also provide information and advice as part of the National Equine Welfare Council-coordinated team of education officers, particularly to children.

We have been keen to put more focus on the positive welfare standards that fair-goers ensure for their horses and so four years ago introduced our welfare awards.

The vets or welfare farrier at Appleby are tasked to find their favourite horses and owners to present with a welfare award. They win a rosette, certificate, medal and membership to the Official Traditional Gypsy Cob breed association. Their photo is shared on social media for friends, family and fair-goers to give them the positive recognition they deserve.

By celebrating some of the high-quality horses and examples of good horsemanship seen at Appleby every year, we hope that fair-goers are encouraged to talk about welfare in a positive way and to set standards for others who attend the Fair. See how we awarded Best Hoof Health at last year's Fair by clicking here.

To date, almost 2,500 people follow the welfare awards’ social media page, and many more are reached with posts attracting hundreds of reactions and shares. Just one post showing photos of 2017’s Best at Appleby overall award-winner reached almost 43,000 people and prompted over 1,300 reactions.

Our welfare awards create a great opportunity for experience-sharing between welfare charities and horse owners, and opens up opportunities for positive conversations to find solutions to management issues such as fitness, farriery and feeding.

A participatory video project at last year's Fair saw winners share their own horse care advice, which in turn was shared through social media. Some of the topics included how to avoid rub wounds when driving, the consequences of using inappropriate shoes to exaggerate ‘flashy’ movement in the horse and driving safely at the Fair.

The above film promotes awareness of fitness considerations as well as cooling regimes. Clearly proud of his horse Henry’s Ace, it was fantastic to work with Eddie who shared our values on showing younger and less experienced owners of trotting horses to take similar care and attention.

Similarly, the above film shows one of 2016’s winners Layne talking through how he carefully removes the bridle of his pony, Mouse.

One of the biggest achievements of the awards is to break down some of the barriers between different horse-owning communities. Finding and celebrating common ground means everyone can be inspired to do more for horses.

The project has received press coverage from the Travellers Times, the leading online and print newspaper for Gypsy and Travellers in the UK. It has also benefitted from the support of the UK’s official breed association for the Traditional Gypsy Cob, the TGCA, who sponsored the awards and offered free membership to all winners. The Participatory Video Project was implemented with thanks to CampaignFilm.

Redwings’ welfare and outreach work like this project at Appleby Horse Fair are all possible thanks to kind donations from our supporters. Click here if you wish to continue to support our work by making a donation, thank you.

To watch all the films created during our Appleby participatory video project in 2017, click here.