Another 108 reasons to spot fever - and get ahead of strangles!

Exciting new data shows why monitoring horses’ temperatures is such a valuable habit to get into, especially when it comes to staying a step ahead of an infectious disease like strangles.

Tests from 109 young horses with strangles showed that 108 of them developed fever before abscesses in the lymph nodes burst.

Fever is part of a horse’s initial immune response to infection, but the most significant amounts of S. equi bacteria are only released into the environment once lymph node abscesses burst. The rupture of abscesses is usually indicated by the production of copious amounts of nasal mucus and pus. 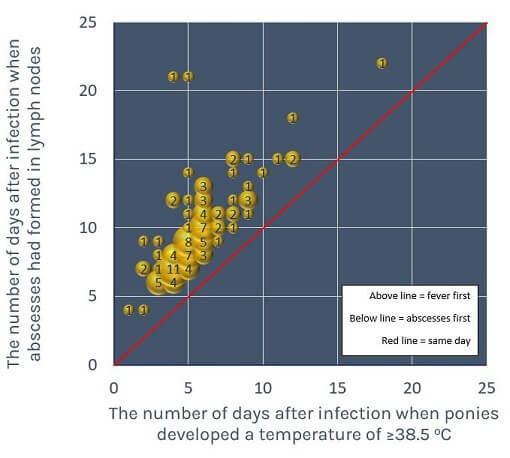 The bubble furthest to the left shows that one horse developed a temperature above 38.5oC one day after being exposed to the disease, but it took a further three days before lymph node abscesses had formed fully. The largest bubble shows that a total of 11 of the 108 horses that were studied developed fever on the fourth day after becoming infected, and abscesses on the eighth day. Only one horse developed a lymph node abscess but had not developed fever within 25 days of infection. The data for this individual therefore isn’t represented on the graph.

The red line represents where the bubbles would sit if fever and abscesses had developed on the same day. Bubbles below the line would have indicated abscesses developing before fever. As you can see, in all 108 horses that developed fever the bubbles are clearly above the line, showing that fever is not only a reliable early sign of strangles, found in 99% of young horses in this study, but also that it consistently developed before lymph node abscesses.

It is also interesting to note that one of the infected horses incubated the disease for 18 days before fever developed, with abscesses being noted on day 22. This reinforces the value of using at least a three-week quarantine period for new horses to a yard, and to check their temperature each day during that time.

This data has been kindly supplied by Dr Andrew Waller and was collected during his time at the Animal Health Trust.

The SAW Temp Check Challenge is the perfect way to perfect your temperature taking technique and get to know your horse’s normal. To find out more about Strangles Awareness Week, which is taking place next week (2nd-8th May), the Temperature Check Challenge and other ways to get involved, please follow the SAW Facebook page or go to www.redwings.org.uk/strangles/strangles-awareness-week

Thanks to your support, Redwings is the coordinating organisation for Strangles Awareness Week. Huge thanks to all our collaborators who you can see below: