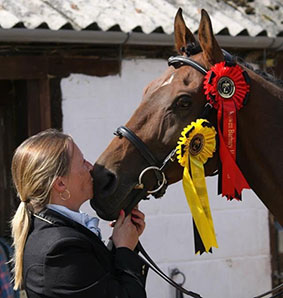 After keeping Thomas alone for eighteen months I lost my grazing and had to move to a livery yard. Five weeks in, one evening I pushed Thomas out of the way whilst mucking out & as I pressed against the side of his cheek, was shocked to feel how hot it was. Thomas was still eating, did not have a temperature, was not coughing, nor did he have any nasal discharge.  I made a mental note to keep an eye on this hot patch. The next evening it had enlarged so the vet was called to visit the following day. She came and diagnosed a tooth abscess. The swelling got bigger! Later that week the same vet and the senior partner called and still diagnosed a tooth abscess. I insisted on bloods. Four days later the results came back and Thomas was diagnosed with bastard strangles.

Due to the stigma of strangles I had to move him a few weeks later. Luckily I found an unused yard and within 24 hours he was moved and turned out. We had 3 courses of antibiotics. All of which just kept producing more abscesses. I stopped the antibiotics & let nature work it’s magic. Thomas was isolated and kept alone for over six months before having scopes.