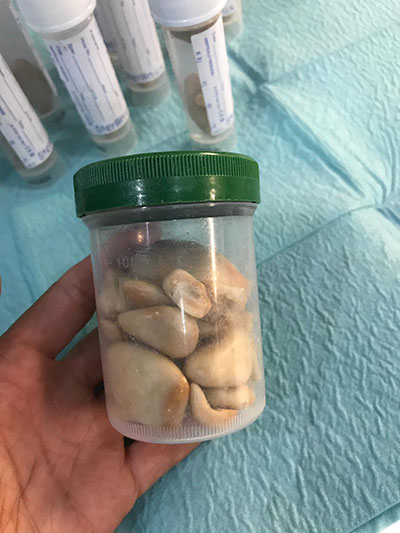 I bought Roo in 2012 and have loved her to bits from day 1. She's got loads of character and we're really close.

I felt lucky to have a horse that was so healthy, or so I thought! In 2018 a new horse came onto our yard and shortly after he got ill and was diagnosed with strangles. The yard was locked down and as part of managing the outbreak, after a while all the other horses had a blood test. Roo's result wasn't really high, but it needed looking into, so she was scoped by the vet. I couldn't believe it when they told me one of her guttural pouches was full, literally stuffed FULL of these infected chunks of dried pus called chondroids. It turns out she had been a strangles carrier the whole time I had had her! I had absolutely no idea that she could have all those things in her head without any sign that something was wrong. I felt really bad that she had passed strangles to the new horse, but it came completely out of the blue to me as well as everyone else on the yard!

Roo had well over 100 chondroids that needed to be taken out. Having so many is really rare, apparently a lot of horses just have one or two! For so many, the best way was for her to have surgery to take them out all at once, whereas if she'd had a few, a vet would have been able to just take them out using a scope. Just my luck!

Thankfully the surgery went really well, and a few weeks later she was retested to make sure all the infection had gone. I can't tell you how relieved I was when she got the all clear! She's now healthy inside and out and I can't wait to bring her back into work in a few weeks time and and put this year behind us!

Roo has seen me through some tough times, so I didn't hesitate to make sure she got whatever she needed to be healthy again, even though it was incredibly expensive. I didn't know that much about strangles before this, but I have learnt so much and am really keen to help stop horses having to go through what Roo went through, and an owner going through all the sleepless nights and expense that I had. I'm really keen to support Redwings Stamp Out Strangles campaign so other people don't have to learn about strangles the hard way, like I did!