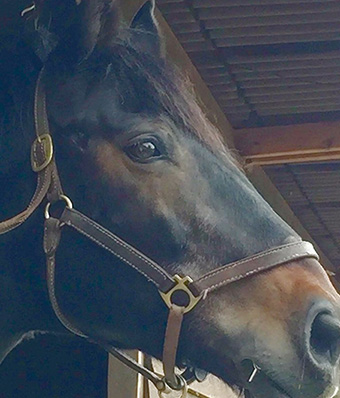 On February 19, 2019 my horse Mac, who’s in his mid-20s, refused to eat his breakfast – which rang alarm bells, especially as two ponies had already been taken ill at the yard with ’flu-type symptoms. His temperature had been normal in the preceding days, but suddenly it shot up, so the vet was called. His diagnosis, for both Mac and the other ill ponies? Strangles.

On our vets’ advice, quarantine procedures began immediately. Red, amber and green zones were set up at the yard for the horses who were ill (red), the ones who might be ill (amber), and the ones who had been tested clear (the green group). Barriers and ropes were used to clearly mark the zones, with a minimum of at least 10 feet between any infected horses and the boundary.

Virkon disinfectant was used to clean everything and to mix in to foot dips. These dips had to be changed regularly. Mac’s feed bowls were disinfected thoroughly between use and his drinking water changed daily. Because of the threat of contamination, his used water had to be treated before being discarded. Any discharge had to be cleaned and disposed of carefully.

Haynets, rugs, headcollars, grooming kit… all had to be completely disinfected. I changed into overalls whenever I was with Mac to stop any possible contamination. Luckily, a friend looked after my other pony so I didn’t have to go from a dirty horse to a clean horse and vice versa.

Mac was very depressed and always had a long face. Another symptom that quickly came to light was his lack of appetite, he was also missing his field companions, although he could at least see them.

Costs rose significantly with all the disinfecting. We needed extra hay, and I tried different foods to tempt Mac to eat. Although we were very fortunate he didn’t develop ‘bastard strangles’ – not a swear word, it really is called this – keeping him happy, safe and secure was difficult as he has never been on his own in isolation before.

The yard was treated as though we had the plague and even local feed stores didn’t want us visiting. So, be warned: if your yard ever gets it, you will feel extremely isolated. We are a small yard and all tried to support and help one another but at times it was stressful and extremely difficult and emotional.

One of the worst aspects of it, aside from my beloved Mac being ill, was that we could no longer bring our dogs to the yard, something we all found difficult.

One positive aspect to all of this were our vets, Fellowes Farm Equine Clinic in Huntingdon, who were incredibly supportive and there for us 24 hours a day. I rang them numerous times when concerned, and nothing was ever too much trouble.

At the conclusion of this experience it was necessary to disinfect EVERYTHING. Fences, stables, field shelters, paddocks, yard, equipment, humans, boots and clothing, all horse equipment and water troughs. We even had to burn Mac’s bedding as it couldn’t go on the muckheap.

As a result of this challenging period no horse is allowed to enter our yard or paddocks now without having undertaken the strangles blood test. We are also a ‘pledged yard’ with Redwings to stamp out strangles. Their site is a fantastic source of information – see redwings.or.uk/strangles