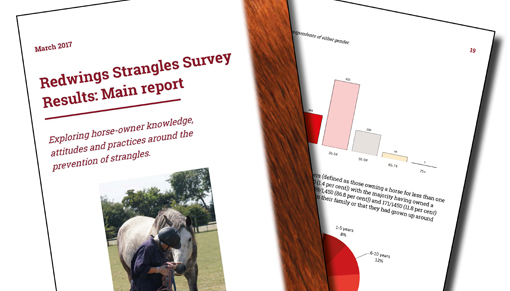 Today marks the publication of the full report of our survey of over 2,000 horse owners to assess awareness of strangles, attitudes towards the disease and biosecurity practices.

Our 2016 Strangles Survey, developed in collaboration with the University of Liverpool, attracted almost 5,000 respondents, with 2002 completing the 60+-question survey in full.

Encouragingly, responses to questions throughout the survey showed an interest and willingness from horse owners to improve biosecurity.

Over 90% of respondents believed strangles should be more of a priority in the UK and, indeed, among the horse owners that took part understanding of the disease and awareness of the symptoms were good with 92.5% correctly identifying fever and 96.0% identifying the classic (albeit later) nasal discharge as clinical signs of strangles. Further, 43% of respondents had personal experience of strangles; 46.1% of whom reported the case was confirmed by a vet.

Despite this awareness and eagerness for strangles to be a priority, only 13% of respondents who kept their horses at a livery yard had their horse screened for strangles on arrival and 74.8% said their yard did not have a screening protocol for new arrivals at all.

This lack of screening does not seem to be because horse owners are not willing to follow the protocol, however; 50.8% said they were ‘very likely’ and a further 28.8% said they were ‘likely’ to use a yard that had strangles testing for new arrivals.

Not only did the survey reveal that there is a demand among horse owners for livery yards to introduce screening protocols, but also nearly 80% of respondents said they would be prepared to prove their horse was not a ‘silent carrier’ (that is, carrying the disease without showing any clinical symptoms either as a result of previous infection or contact with another infected horse) by paying for screening should their yard introduce biosecurity measures. 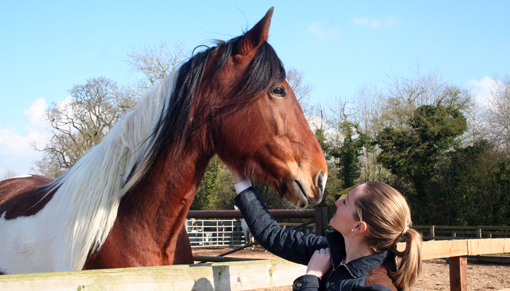 As well as identifying this demand among horse owners for improved biosecurity at their yards and willingness to invest in screening, the survey did reveal that some myths and negative attitudes towards strangles continue to exist. In a list of true or false statements, over a third (36.0%) respondents thought strangles was ‘an airborne disease like flu’ – a misconception that the charity believes hampers owners’ perception of being able to prevent the disease; strangles is spread through direct contact with an infected animal or infected material.

Similarly, during scenario-style questions, the responses from those who did not have previous experience of strangles veered towards the more pessimistic – the attitude largely being that strangles is a ‘life-threatening disease’ and something that was ‘difficult to treat’. Those with experience of the disease tended to be more pragmatic about its prevention and management.

However, even when taken as a whole, a large proportion of respondents felt that ‘it was not possible’ to eradicate strangles in the UK – 35.5% party agreed and 13.8% completely agreed with this statement. And worryingly, 16.6% respondents said one of the ‘main reasons’ they do not take more steps to prevent strangles was because they believed it ‘is not possible to prevent strangles/it is just something that happens’.

“It is not only strangles that we need to stamp out,” reflected survey pioneer and Redwings’ Education and Campaigns Manager Andie Vilela, “but the attitudes and perceptions towards the disease that prevent or undermine motivation for horse owners to act.

“Nonetheless, the number of people willing to take part in this survey and the fact that 43% respondents reported experience of strangles is incredibly encouraging and shows that owners are willing to speak out – something we at Redwings believe essential to remove the stigma surrounding the disease.

“With this valuable data, I have real confidence in the next stage of our ‘Stamp out strangles’ campaign to make real progress by increasing owner awareness, improving biosecurity measures and eradicating the disease among the UK horse population. I believe the key to achieve this is more screening on yards and for carriers to be cleared of the disease.” 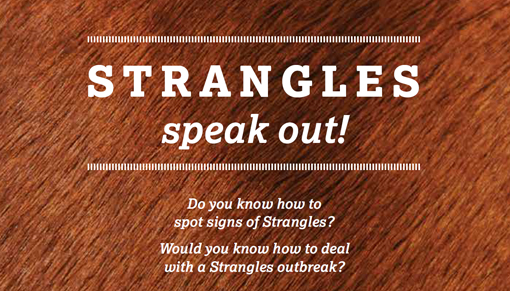 Background to the Redwings Strangles Survey

The survey was launched in April 2016 as part of the charity’s ‘Stamp out strangles’ campaign and was inspired, in part, by their own strangles outbreak in February 2015; an outbreak that saw 30 horses test positive for strangles, many more horses requiring testing and thousands of pounds spent during an eight-month battle with the disease.

Although Redwings is highly experienced in managing and treating strangles in rescue cases, this was the first time in 23 years that the Sanctuary had an outbreak in one of its resident herds, and the charity felt it essential to speak out immediately. Eager to encourage others to #SpeakOutOnStrangles, Redwings launched their 2016 Strangles Survey to gauge horse owners’ perceptions of the disease and whether they are equipped to deal with an outbreak situation of their own.

Redwings’ strangles survey was developed with the kind support of Dr Claire Scantlebury at the University of Liverpool. The charity would also like to thank Dr Jo Ireland at The Animal Health Trust and all those who helped develop, support and complete the survey.

Redwings’ free strangles information and prevention pack for yards and horse owners can be downloaded here - or can be requested in hard copy, including quarantine posters, by emailing education@redwings.co.uk