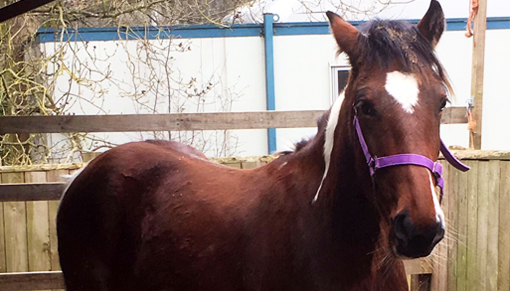 On Wednesday 1st March 2017, our team rescued an abandoned pony found wandering Harlow common in Essex and straying into a nearby residential area.

Following a welfare report from a concerned member of the public for a loose pony that also had a suspected broken leg, our senior field officer Jo Franklin attended where she found a young skewbald filly showing signs of lameness.

On initial findings it was clear the pony was not suffering from a broken leg, as there were no visible signs of injury, swelling or wounds to the legs; however, as well as being very young in age, the 14hh Trotter-cross was completely unhandled so our senior veterinary surgeon Roxane Kirton was called to help catch and examine her.

Trixie – as she has since been named by our team at Redwings Ada Cole – was brought back to our Essex visitor centre, where it was discovered she was suffering from a painful foot abscess.

While undergoing veterinary treatment in our care, abandonment notices for Trixie had been issued on Harlow common with the hope of an owner coming forward to claim her but sadly to no avail.

Trixie has now, therefore, been given a permanent home at Redwings. However, the issues surrounding the horses living on Harlow common continue.

“Put simply, there are too many horses on Harlow common,” explains senior field officer Jo Franklin. “And the majority are unhandled and unidentified – enforcement of passporting and microchipping regulations is essential to identify the horses and to put the responsibility back onto the owners.

“Unfortunately, the authorities and welfare charities are increasingly called upon to intervene, but we need to ensure owners can be identified so they can be brought to account for poor management and to deter more horses being dumped on the common”.