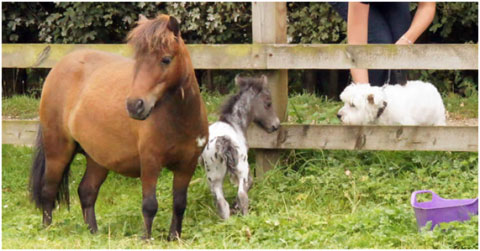 Born on Saturday 26th July 2014, Tucker has caused a real sensation with visitors to our Ada Cole visitor centre where he now lives!

Tucker the spotted Miniature Shetland was a titchy 43cm tall – that’s less than 17 inches – and weighed just 10kg when he was born. He was so named on behalf of a Redwings supporter who had sadly lost her husband and asked for a foal to be named in his memory.

Despite his size, Tucker has already made a huge impression on the veterinary team and care staff here at Redwings. After a healthy birth Tucker was brought into the veterinary unit as he was a little weak and struggling to stand, but following some rest in the stables Tucker was growing stronger by the hour.

Subsequently, Tucker and his mother were turned out into a paddock still within sight of the veterinary unit at Redwings HQ where he met office dog Rosie the Westie (above), who is about his equivalent in height!

Commenting on the little foal’s arrival, Redwings Chief Executive Lynn Cutress said: “Tucker is an absolute delight and it is lovely to see how this little chap has already captured the hearts of so many at the Sanctuary. He may well be the smallest foal we’ve ever had here at Redwings.”

Tucker’s mum Beau arrived at Redwings in foal as part of a group of Miniature Shetlands. They were brought to the Sanctuary from an owner in Essex who had been struggling to cope with their care, and both mum and baby have now gone to live at our Ada Cole visitor centre in Harlow, so you can come and marvel at Tucker’s tiny size too! 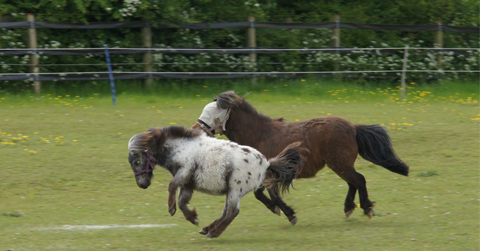 Redwings is completely dependent on public donations to continue its work. If you would like to help fund the ongoing care of Teeny Tucker and his mum please make a donate. Thank you.