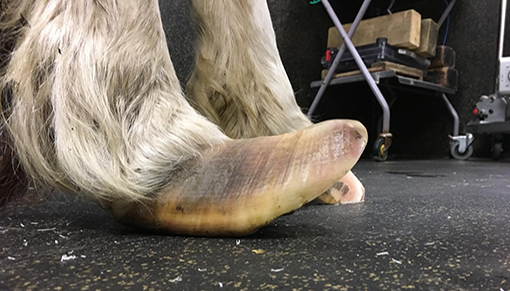 Abandoned pony Tilly could barely walk due to the pain caused by her severely overgrown hooves.

Now the Shetland cross is beginning a new safe and happy life at our Ada Cole visitor centre, near Harlow in Essex.

Little Tilly, who is believed to be about 19 years old, was discovered on a large parcel of land near Coalhouse Fort, in Tilbury, in February looking in obvious discomfort. A concerned member of the public reported Tilly to fellow animal charity, Remus Horse Sanctuary, who called us for support.

Upon seeing the desperate condition of her feet, Redwings Senior Field Officer Jo Franklin worked with the RSPCA to remove Tilly from the site as quickly as possible. Police, alongside a vet, attended and seized Tilly, and she was transported to the House and Jackson Veterinary Hospital, near Chelmsford, for treatment. After an extensive hoof trim, she was able to move around much more comfortably.

With sadly no trace of her owner to be found, we offered Tilly a new forever home at the Sanctuary. This month, she arrived at Redwings Ada Cole where everyone has the chance to meet her and give her a welcoming scratch. 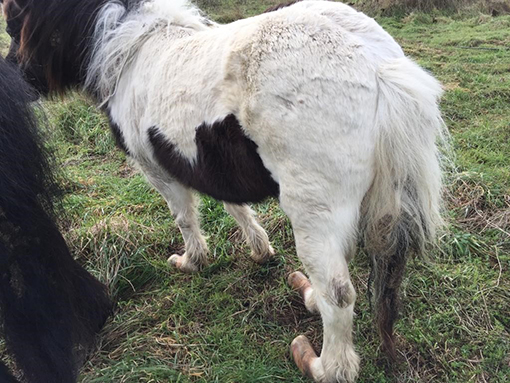 Jo Franklin said: “Tilly had one of the worst cases of overgrown hooves I’ve seen in a long time. It was obvious she was in severe discomfort and I’d like to thank the member of the public who took the time to report their concerns which ultimately led to her rescue.

“Frustratingly, there was no reason for Tilly’s hooves to have got into such a desperate state. Simple, regular foot trims would have ensured her hooves stayed in good condition and she would not have had to have suffered like she did.

“This rescue was a great example of animal welfare organisations coming together to help a pony in desperate need and now, thanks to that teamwork, Tilly has a safe home where she’ll receive all the care she needs for the rest of her life.”

RSPCA Inspector Mitchell Smith, said: "I am so pleased to hear that Tilly has found a forever home at Redwings. When she was found her hooves were in a terrible condition and in urgent need of attention.

“Thankfully, the care of everyone involved means she is now able to live out the rest of her life in comfort and I am sure she will have lots of admirers at her new home.”

Everyone is welcome to meet Tilly and her new friends at Redwings Ada Cole every Friday, Saturday, Sunday and Monday, 10am to 4pm. Entry is free and dogs on leads are welcome too.