Redwings’ welfare team receives numerous calls from members of the public who are concerned about equines that they have seen tethered on a rope or chain. These are often noticed on open areas of land or close to roadways. People who report such equines to us are usually concerned that the animals are not properly cared for or that tethering itself is cruel.

Under current law, however, tethering is not illegal and welfare professionals can only intervene to help a tethered horse if the horse is actually suffering in some way, like the pony in the picture below. 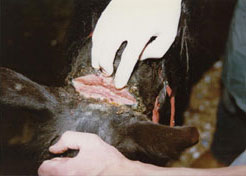 Blackjack was caused extreme pain by the headcollar with which he was being tethered. The headcollar was far too small and had become embedded in the skin across the top of poor Blackjack's head. In this kind of situation welfare organisations will intervene swiftly and Blackjack’s owner was successfully prosecuted for causing unnecessary suffering to his pony.

If the horse is in good bodily condition, however, and is tethered so that the fittings are not causing pain or discomfort, then the owner is not guilty of any offence. 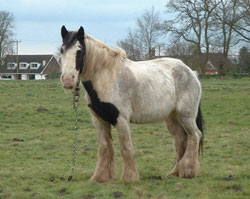 This cob looks a little unkempt but is well-nourished and appears to be tethered in an open area, free from hazards.

In February 2019 there was a debate in Parliament concerning whether to ban or further control the tethering of horses as part of secondary legislation to the Animal Welfare Act. While we’re very sympathetic to the concerns raised about tethering, we believe that behind the emotive language around this subject, there are very complex issues to consider surrounding the potential impact of additional legislation on existing welfare initiatives, not to mention its enforceability.

Although we acknowledge that tethering is not the ideal way to manage horses and it’s not something we would ever do at Redwings, if done properly and to the correct standards it can be an effective short-term management method for some owners, especially to prevent stallions from wandering or to prevent horses from straying onto busy roads.

It’s a method particularly associated with Gypsy and Traveller members of the horse owning community, and we are concerned that actions to ban or restrict tethering too far would only serve to further marginalise those horse owners.

Legislation to combat poor tethering practice already exists in the form of the Animal Welfare Act, and DEFRA’s Code of Practice for the welfare of horses, ponies, donkeys and their hybrids makes clear the standards that are expected. If this protection is not deemed as being effective enough, then we would endorse a push towards better enforcement rather than a further layer of legislation which could only add to the existing enforcement struggles.

We would urge, in all cases, that any legislative changes be very carefully considered with broad consultation across the sector to ensure they do not lead to other welfare concerns or further marginalise the very owners we would wish to reach.

The following points may be of interest to those concerned about tethered horses:

If you are concerned about a particular tethered equine or would like more advice on the subject, please feel free to contact the Redwings’ welfare team on 01508 481008 or through the email link on the contacts page of this website. In an emergency situation out of normal office hours please contact the RSPCA on 0300 1234 999.