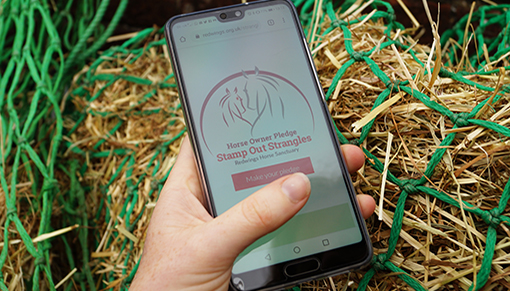 One year on, an initiative to inspire more people to speak out on strangles and take proactive steps to protect their horses has already seen over 710 horse owners and 145 yard managers across the UK pledge their support!

Last November, we launched an online ‘Pledge’ as part of its award-winning Stamp Out Strangles campaign, urging horse owners and yard managers to make a voluntary commitment to champion biosecurity practices, which has already attracted support from yards including Hartpury University & Hartpury College and Richmond Equestrian Centre.

You can take the Stamp Out Strangles Pledge here.

Andie Vilela, Campaigns Manager, said: “We’re thrilled with the reaction the Pledge has attracted this year because we know that people are more likely to make positive, proactive changes if they’ve made a commitment to do so.

“It’s also encouraged more yards and horse owners to speak out about their experiences of strangles and the stigma that sadly still exists around this disease, showing that there is a clear appetite for attitudes to change.

“The more people continue to share that they have pledged, the more we can nudge standards up so that poor hygiene facilities, absent biosecurity protocols – or even keeping quiet about an outbreak - will all be consigned to the history books. We want to make changes before an outbreak happens!”

The Pledge is part of the Stamp Out Strangles online hub - which also launched a year ago - full of practical information, advice and resources for yard managers and horse owners, as well as section for vets and other equine professionals. 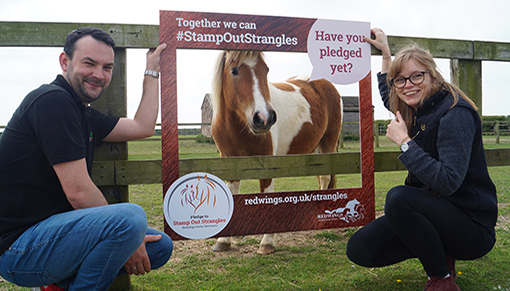 Since then, we've continued to engage with the equestrian community throughout this year on this important issue.

In March, we co-sponsored a Strangles Symposium, which brought together researchers, vets, farriers and equine welfare organisations, at The Royal (Dick) School of Veterinary Studies in Edinburgh, to discuss the better prevention and management of the disease.

This was followed in May with our Head of Welfare & Behaviour, Nic de Brauwere, and Andie Vilela joining the world’s leading scientists and vets at the Dorothy Havemeyer Foundation Workshop in Iceland to present on their experiences of strangles.

Then, in July, Redwings instigated a special day of action - Speak Out On Strangles Day - which urged yards to host activities for their clients, such as horse temperature taking sessions and revising protocols, to encourage more conversations about good biosecurity and to help tackle stigma.

And the year isn’t finished yet! In December, Redwings will be organising a free veterinary seminar for horse owners in South Wales and plans are already underway to make Speak Out On Strangles Day even bigger next year.

Meet a Stamp Out Strangles Pledger

Pledger yard, Richmond Equestrian Centre in North Yorkshire, re-opened in October following a seven-week closure due to a strangles outbreak amongst five of its horses.

As soon as strangles was confirmed, the centre immediately closed its doors, notified the public through its website and social media channels, and isolated the infected horses to prevent further spread. Sadly, this meant the suspension of the centre’s riding club and its BE Horse Trials – it’s largest event of the year – but Co-owner Abigail Turnbull was determined that no further horses would be put at risk.

Abigail said: “When the outbreak started, we did as much research as we could and found the Redwings strangles hub, read everything we could and signed up to the Yard Manager Pledge right away. We’re sure the online advice and isolation procedures helped to stop the infection spreading to the other 21 horses on the site.”

She added: “I’ve been shocked by the number of people who have said I should have kept it quiet, but on the other hand, we’ve had even more people say how much they respect us for being so open - we’ve been inundated with enquiries about liveries. At the end of the day, it’s the horses’ welfare that’s got to come first.”

The centre’s clear communication and promotion of Redwings’ Stamp Out Strangles campaign has led to over 130 new horse owners committing to the Pledge.

“We wouldn’t wish to go through it again but we’re determined to turn a negative into a positive. I feel like I’m on a mission to educate because people don’t realise how highly contagious strangles is unless it happens to you or someone you know,” said Abigail. “It’s definitely good to pledge. It’s easy, it’s free and you can learn a lot.”