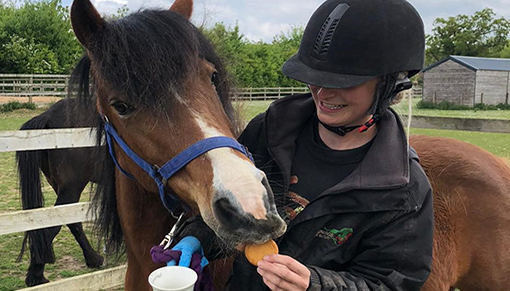 Surely the best part of giving blood is the cup of tea and biscuits at the end?! Thaxton certainly thinks so!

Thaxton, a handsome Welsh pony, is currently spending time at the Redwings Horse Hospital in Norfolk where he is keeping his best friend, Native grey pony Blue John, company while he receives treatment for a chronic eye issue.

Don’t worry; he’s not really drinking tea in these photos but our vet team wanted to celebrate just how heroic Thaxton has been in helping his friend in his recovery.

Blue John suffers from equine recurrent uveitis, an inflammatory condition of the eye, which over the years has left him partially sighted. Not that this has ever held him back from being the lovely lively pony we all adore!

More recently he developed a very large ulcer on the surface of his right eye and was admitted to the Horse Hospital so intensive treatment could be given around the clock.

Serum, the liquid component of whole blood, is proven to help ulcers heal and is often applied several times a day in severe cases. So, during his stay at the Horse Hospital, healthy Thaxton has been helping the vet team to provide the vital serum needed to treat Blue John.

Only a syringe full is needed to make enough serum and Thaxton doesn’t even notice the blood being taken - he is far more interested in his horsey treats!

The serum is then administered via a lavage system, carefully placed under the eyelids, which delivers medication directly into Blue John’s eye without his carers having to touch his eye or face, making his treatment as effective and efficient as possible, and the experience far less stressful for him. 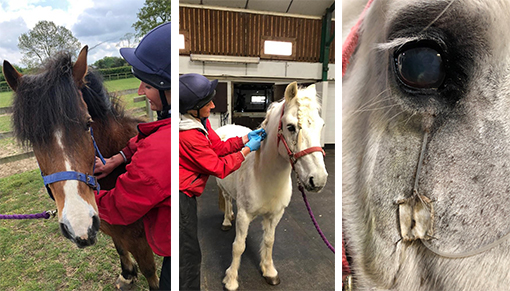 Serum from Thaxton's blood is used to treat Blue John's eye through a lavage system.