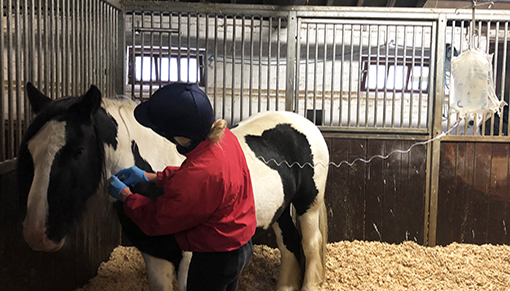 Beautiful boy Ned has lived at Redwings since 2010 following his rescue from Spindle Farm in Amersham, Buckinghamshire along with over 100 other horses. The rescue was one of worst cases of neglect that the UK has ever seen.

Ned has had a lot of hurdles to jump with his health since then, including two bouts of severe colic (abdominal pain which can be life-threatening) not long after his arrival at Redwings and a third bout two years later. Each time, our incredible in-house vet team based at our Norfolk-based Horse Hospital were able to successfully treat him and Ned recovered well.

Unfortunately, Ned recently started showing symptoms of colic again. Our care team (who check every rescued residents at least twice per day) spotted Ned rolling a lot in his paddock and appeared to be quite uncomfortable. Redwings vet, Dawn Trayhorn, assessed him and monitored him closely for 24 hours, in which time his condition seemed to improve before he suddenly began to show symptoms of colic again.

Dawn decided Ned needed to be admitted to the Horse Hospital so she could give him a more thorough examination. This included checking his gums to give an indication of blood pressure, hydration and circulatory function, listening to his four quadrants for intestinal movement sounds (the quadrants refer to the areas of Ned’s body where much of his intestines are stored) and a scoping procedure to check for stomach gastric refluxes.

Following Dawn’s assessment, Ned spent some time in one of our intensive care stables on a drip and our night care team took him on short walks throughout the night to aid his treatment. This 24/7 care helped to ensure he had the very best chance of making a full recovery.

Happily, after a few days, Ned’s condition improved so much that he was able to return to his paddock and his friends, and is continuing to do very well. We all think he deserves some recognition for being so brave during his treatment and we're sure you’ll agree with us!

Ned's recovery was a real team effort - from the care team who spotted his first signs of colic, to the vet team who provided his swift treatment, from our nights team who ensured he was monitored throughout the early hours to our supporters who without their help we would not be able to treat and save ill horses like Ned. Thank you #RedwingsAngels!

You can watch his story of recovery below!