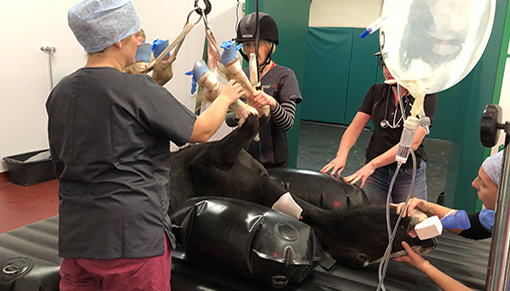 We often get asked about what takes place in our Horse Hospital, especially our operating theatre!

The operating theatre is used for a range of procedures, from emergency colic surgery to routine castrations. With 1,500 rescued horses, ponies, donkeys and mules to care for, we do not want to encourage further breeding!

So, we recently followed little pony Buddy into theatre as he underwent castration surgery to see what was involved and watch our skilled veterinary team in action!

Buddy came into the care our care earlier this year after cruelly being dumped on the side of a busy main road in Norwich when he was just six months old. He was quite poorly and nervous, but thanks to plenty of care and love given to him by our team, he is now recovering very well.

Both Buddy and his best friend Shadow were scheduled to have castration surgery on the same day so they could recover together and return to their normal routine as soon as possible. There are two ways to perform a castration – either under standing sedation or under general anaesthetic. Due to their young ages, general anaesthetic was considered the best option for both Buddy and Shadow.

Preparation began with Buddy being sedated and then gently, with the support of the vet team, hoisted across into the operating theatre. The vet team then scrubbed up thoroughly before cleaning Buddy for a lengthy amount of time to ensure as little risk of post operation infection as possible.

Once all the surgical preparations had been completed, vet surgeon Alex proceeded with the castration itself. This involved making one small incision, one testis at a time being brought through the opening, some thread being carefully wrapped around the area that needs to be snipped and then the safe removal of the testis.

Buddy’s surgery was very successful and he was soon placed in our padded recovery box where he was gently woken up.

He’s now back out in his paddock with Shadow and all his other friends and seems entirely unphased by the whole experience! What a brave boy!

Many thanks go to our hard working vet team who perform routine procedures like this on a daily basis to keep our horses healthy and happy, and to you - our supporters - who enabled us to rescue Buddy, offer him a safe forever home and provide the specialst care and veterinary attention he needed to make a full recovery.