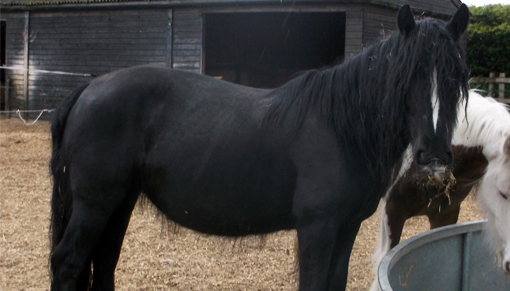 On Friday 18th November 2016, a Norfolk man was banned from keeping horses for five years, given a two-year suspended prison sentence and ordered to pay £200 in costs having previously (14th October) pleaded guilty to causing unnecessary suffering to a horse called Spanish Girl (also known as Crystal).

In February this year, our welfare vet Nicola Berryman and field officer Julie Harding, together with the RSPCA, attended an extremely thin 13-year-old, 13.3hh black cob grazing in a paddock in Diss.

“When I saw Spanish Girl - she was absolutely emaciated, with a body condition score of just 0.5,” commented vet Nicola. “Sadly, when we found her she had recently aborted a foal. I suspect because she was in such poor condition, her body simply couldn’t support the pregnancy”.

RSPCA inspector Jason Finch continued: “I hardly recognise her in her current state now; she has been transformed by Redwings and bears no resemblance to the horse I found in February.

“She was dull, depressed and non-responsive, and was extremely weak on hind limbs. Her hooves were all overgrown and cracked, and she was very obviously a lot thinner than she should have been.”

Spanish Girl was also suffering from an advanced parasite infestation, which could have been easily avoided with effective worm control. Nonetheless, her transformation and recovery has been remarkable as Nicola describes:

“Spanish Girl has recovered well from the trauma of her miscarriage with no further complications, and has gained weight. She is an older mare who needs regular dental work and it was clear she had dental issues when we first found her, which were contributing to her poor body condition.

“She was also very nervous when she arrived and is now undergoing handling training. She is making great progress and is definitely growing in confidence!

“We would like to express our thanks to the RSPCA for bringing this prosecution, which reinforces the need for every owner to take responsibility and ensure proper care for their animals.”

It is thanks to our supporters that we are able to rescue and bring back to health horses like Spanish Girl, please help us be there to help more horses in need by donating below:

Help us help horses in need like Spanish Girl

Wising up about worms

The Redwings Show Online is back!