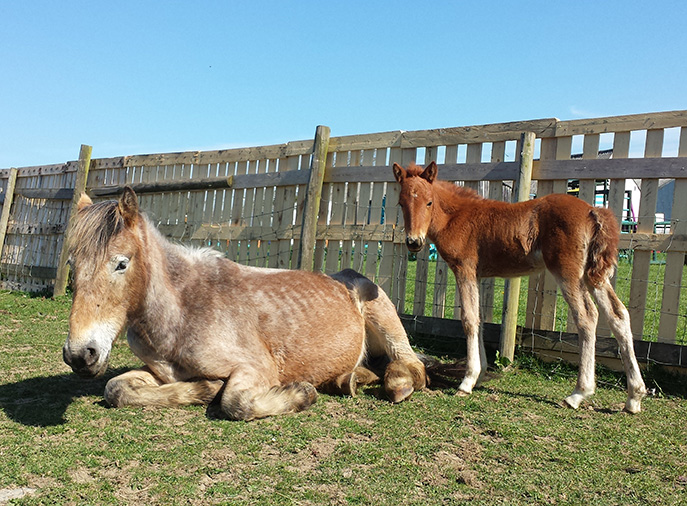 A stallion, and a mare and her foal, have been rescued from the very spot where scenes from the hit BBC television series Poldark were filmed.

Three horses found running loose on Bodmin Moor – all extremely emaciated and in desperate need of veterinary intervention, feed and care – have been rescued by a team of local vets, farmers and the Bodmin Moor Shadow Commons Council; a rescue operation for which we offered financial support and are happily able to fund the ongoing veterinary care of the horses.

No owner has come forward to claim responsibility for any of the horses, since named after characters from the BBC’s Poldark television series by their rescuers. The dark bay stallion Ross Poldark was found in the Craddock Moor area in a very dire state. He had a body condition score of 0.5, meaning he was incredibly weak, and Lorna Stevenson, the APHA Veterinary Officer who authorised the ponies’ removal, stated she believed he would almost certainly die without immediate help.

Meanwhile, the mare found in the Pensilva area and since named Demelza after the wife of Poldark, was also in serious danger, with a body condition score of just 1. She had a foal at foot who is thought to be between seven and ten days old. All three ponies have been moved to a nearby yard where they are receiving urgent veterinary attention.

“Just like the ‘real’ Poldark, our little pony Ross bears the scars of battle,” said Julie Dowton, Secretary to the Bodmin Moor Commoners and the Association of Bodmin Moor Commons Landowners, who led the rescue operation. “Demelza in the series is a scrawny little thing who is totally unloved until help comes along, so what else could we call our mare? It was an extremely tough few days but we are so pleased that this story has a happy ending. Big thanks to Lorna Stevenson VO for all her hard work, to the Pooley family who have offered to house these poor ponies, and to Redwings for their financial support to help us get these ponies away from danger.”

Redwings have been involved in a current DEFRA consultation on the establishment of a Bodmin Moor Commons Council to try and improve overall welfare standards of grazing animals on the moor and to resolve issues such as the lack of an established register for those who have grazing rights, not to mention the problem of indiscriminate breeding.

Our Head of Welfare and Behaviour Nic de Brauwere explains: “The teamwork shown in rescuing these ponies only serves to demonstrate how effective we can be when we all work together, but the ponies should never have been allowed to get into this state in the first place. We believe an established council made up of representatives from the commoners, local vets and other interested parties who have the authority to take action on issues like these, could make a real and lasting difference to the welfare of the ponies on Bodmin.”

If you would like to support us in funding the ongoing care of the Poldark ponies, you can donate towards their future.