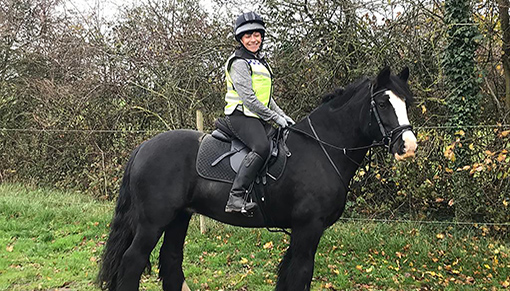 We've rehomed a record number of rescued horses this year despite our Guardianship scheme being suspended for two months due to lockdown restrictions.

We've seen a 75% increase in the number of horses finding loving new homes outside of the Sanctuary compared to the previous year, rehoming more horses in the time since our scheme was reinstated in May than in the whole of 2019.

Despite the unique challenges of 2020, we've been able to rehome more rescued horses and ponies than ever thanks to the expansion of our scheme, which included the construction of new rehoming centres at our Caldecott visitor centre in Norfolk and Oxhill visitor centre in Warwickshire last year.

As lockdown restrictions eased, our teams also turned to technology to innovate new ways to run its scheme and match rescued ponies with potential Guardians, such as virtual home checks and introductions made via video.

Rachel Angell, Head of Norfolk Equine Operations who heads up our rehoming scheme, said: “Lockdown came just as we were about to enter our busiest season for rehoming enquiries and our new rehoming centres were getting started on training their first intake of ponies, so it was a really disappointing to have to press pause on our scheme at that time.

“While unfortunately there are still some restrictions around rehoming our ridden horses, thanks to the adaptions we made to our application process, we have been able to safely rehome our unbacked project ponies and non-ridden companions since lockdown. Even with the increased demand, we were careful to ensure our priority remained finding responsible Guardians who could offer long-term homes and it’s been a joy to see such a record number of our horses successfully finding new families this year.

“By rehoming a rescued horse from a registered charity, they have helped to create space at the Sanctuary so we can help more horses in desperate need in the future.” 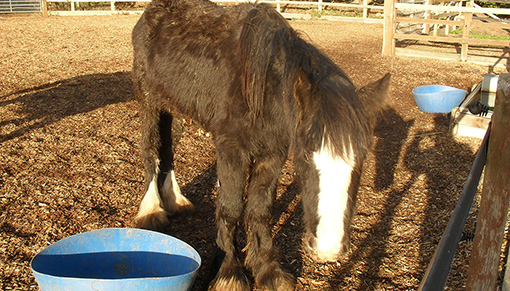 Mocha shortly after his rescue.

One of the first ponies to complete his training at the Oxhill centre, and then be rehomed through our new virtual process, was Redwings Mocha who is now living in Norfolk with his Guardian Debbie (pictured at the top of the page).

Inspired by a friend who was already a Redwings Guardian, Debbie fell in love with Mocha’s profile on our website. She said: “The virtual process was fabulous and really easy. The Redwings Rehoming team emailed me lots of videos and photos of him and his training so far.” Mocha then arrived in his new home in September.

Mocha was one of 23 horses rescued in 2011 from a site in Northern Ireland. They were found living in appalling conditions and in a terrible state of suffering; left without food, water or clean bedding, and many of them were suffering with worm infestations, overgrown hooves and infectious diseases such as strangles. Once at Redwings they were named after breakfast items and the group became known as ‘The Breakfast Club’.

Happily, several of The Breakfast Club have now been rehomed and Mocha is the latest to follow in their ‘hoofsteps’. Rehomed as an unbacked project, Debbie arranged for him to be professionally trained to be ridden and now the pair enjoy hacking together.

She added: “I am so proud of him. He has learnt so much in such a short space of time. His trainer said he was by far the best horse she had ever backed which I’m sure is down to the groundwork done at Redwings. In our hacks around the village he is never phased by anything, I am amazed by him and he’s a little superstar!” 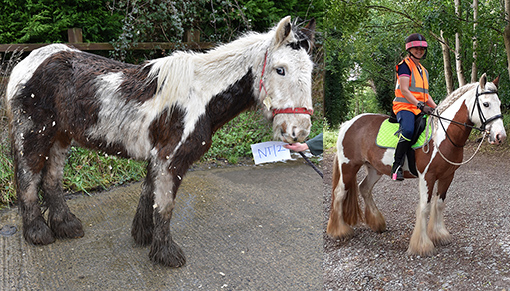 Cookie pictured at the time of her rescue and now in her Guardian home.

This year has not only seen rescued horses find new homes, but those already rehomed have also thrived. Redwings Cookie has just marked her one-year anniversary in her new home and could not be further from the emaciated and poorly pony who came to the Sanctuary in 2016.

Cookie was the only survivor from a group of three mares rescued from a site in south Norfolk who were suffering severe issues with their digestive systems due to heavy worm burdens and irreparable liver damage.

Happily, beautiful Cookie made a full recovery and was rehomed in November 2019 to her Guardian Angela in Suffolk as an unbacked project horse. This meant that she had received basic handling training at Redwings, and then Angela ‘took over the reins’ to help her fulfil her potential as a ridden horse.

Angela said: “I can't believe it's been a year already, but I've loved every moment of being Cookie's Guardian. She's been such a joy to work with, from building her trust and confidence, to backing her and then getting her out and about. Every step of the way has been packed full of rewards.”

The pair have worked on their schooling and built up their hacking together, even going as far as volunteering for Suffolk Police as they go about their riding routes. In August, the pair even entered their first dressage test and came home with a rosette.

Rehoming a rescued horse or pony from Redwings is free of charge, but £50 is requested towards the cost of their passport and additional donations are welcome.

Redwings retains ownership of all its rehomed horses, so if the circumstances of the Guardian were to change, the horse could return to the Sanctuary.

Click here to find out more about our Guardianship Scheme and the ponies ready to be rehome.