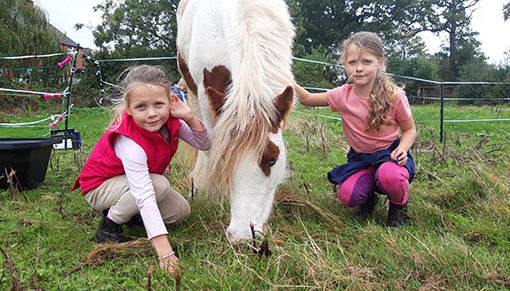 From appalling neglect to happy new lives in loving homes, rescued horses rehomed by Redwings have thrived this year.

Just three years ago, Strawberry Shortcake was found alone, severely underweight and suffering from diarrhoea at a horse fair. Now this beautiful girl has become one of the first to be rehomed from our new Rehoming Centre, which opened at our Caldecott Visitor Centre, near Great Yarmouth in Norfolk, this summer.

Strawberry Shortcake (pictured above) was given a new home in October with Guardian Kim, from Suffolk, and her daughters Poppy and Millie, aged seven, and Ruby, aged four. Having already been a long-term Redwings supporter, Kim first met Strawberry Shortcake when visiting Redwings Caldecott with her family this summer.

She said: “We saw her being tacked up for one of her training sessions. The team told us that she would be looking for a home as a lead-rein pony and I instantly fell in love with her. Everything they said about her sounded perfect for us.”

After successfully applying to bring Strawberry Shortcake home, Kim added: “I kept her arrival as a surprise for the girls and they came home from school to find her in the paddock and the promised pink headcollar for her!

“She is doing really well and her little character is starting to shine. We are taking things slowly with her and hopefully next year we might be able to start thinking about gymkhanas and some shows. She is very much loved and the girls think the world of her.”

Meanwhile, gorgeous Stitch, who was rehomed from Redwings in 2013, competed for the first time this year with her Guardian Rebecca at the Riding for the Disabled Association (RDA) National Championships.

Poignantly, her debut at the highly-regarded competition marked a decade since her rescue, alongside 10 other ponies, who were discovered abandoned, in poor condition and suffering from worm burdens. 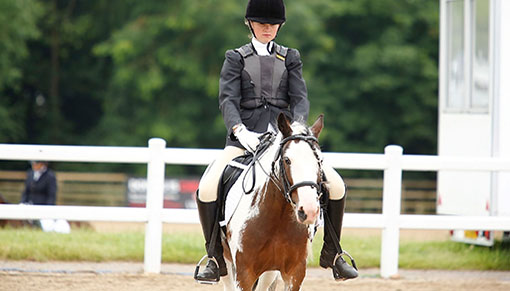 Stitch and Rebecca, from Cambridgeshire, competed at the RDA Magpie Centre near King’s Lynn, where they qualified for the regional competition. A second place in this competition took them to the National Championships where they competed in the Intellectual Disability Dressage Championships and came third out of 25 riders!

Rebecca said: “Stitch is not just my competition pony, she is also my therapy pony. I have dyspraxia and autism, and she is always there for me on the good or bad days with my balance or coordination problems. Over the last year she has built up my confidence and ability in riding as she is always so patient and understanding when I am struggling.”

Following the merger of Redwings and Welsh charity Society for the Welfare of Horses and Ponies (SWHP) in February, the Sanctuary became responsible for a further 200 rescued horses and ponies living in Guardian homes.

Bear, who was formerly rehomed by SWHP, has gone on to compete for Wales! This handsome boy was once found with eight other horses, stranded in deep mud, malnourished and frightened. But last year, Bear and his Guardian Grace were selected to ride at the Pony Club Championships and in the British Dressage Youth Team, and this year the pair were chosen to compete as part of the Welsh team at the new Pony Club Dressage Home International competition – and Wales came second! 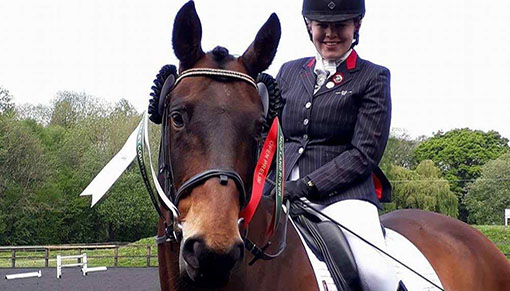 Lynn Cutress, Chief Executive, said: “It’s always heart-warming to hear of the achievements of our rehomed horses and ponies! Whether they’re competing in national championships, like Stitch, or simply enjoying a happy life as a companion to another horse, seeing them become treasured members of new families, is incredibly rewarding for everyone involved in their rescue and rehabilitation.

“It’s been a particularly exciting year for our Guardianship Scheme! At the start of 2019, we welcomed new Guardians through our merger with SWHP and have loved finding out more about their horses and successes. We’ve also opened two brand-new rehoming centres in Norfolk and Warwickshire which have already helped ponies, like Strawberry Shortcake, find loving new homes.”

“These new facilities are enabling our teams to train even more rescued horses to find Guardian homes, providing the space to bring more horses and donkeys in desperate need into the safety of the Sanctuary.”

Click here for more information and to apply to become a Redwings Guardian.