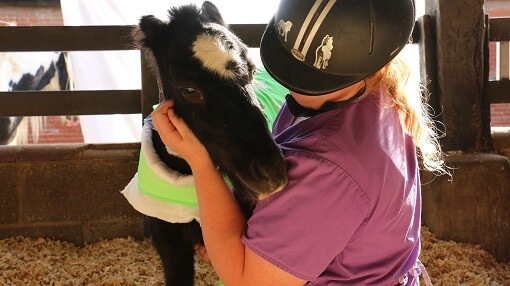 A Norfolk business, whose cruelty-free candles have been stocked in our shops since they launched during the pandemic, has created a special edition to raise funds in memory of foal Phoenix.

Norfolk Aromas was set-up at NHS-worker Andrew Macey’s kitchen table – and he credits Redwings with turning his lockdown hobby into a business.

Andrew said: “I had set up a social media account to try to sell a few of my candles and Gareth (Austin-Mills), the Retail Development Manager at Redwings, came across it and got in touch.

“He invited me to come for a visit and I just fell in love with the charity. I just thought ‘I want to work with these people’.

“Like so many of us, I followed Phoenix’ story from the very beginning and was devastated that he couldn’t have the long and happy life we all wanted for him.

“I wanted to do something to honour him and his memory and so we came up with this In Loving Memory candle to raise money for Redwings, who are not only a wonderful charity but have also been brilliant with me, and so instrumental in my fledgeling business that I really want to give something back.

“Phoenix’ story, which I know captured the hearts of everyone who heard about him, is on the back of every candle and all the profits made are going to Redwings to support their vital work.”

Four-month-old foal Phoenix came in to us in August last year having been the victim of an apparent arson attack. When his extensive wounds had healed as well as they could and it became clear that they would never allow him to live a good quality of life, further intervention had to be taken.

On Tuesday 19th October, a leading veterinary surgeon from the Netherlands joined the Redwings vet team to perform what it was hoped would be a life-saving procedure at the charity’s Horse Hospital. Very sadly, Phoenix did not recover from the general anaesthetic.

Gareth said: “Every time Andrew and I spoke during that time, the very first thing he’d ask me about was how Phoenix was doing, and I know he was very upset to hear the news of Phoenix’ passing.

“We’re really touched by Andrew’s kind and generous gesture and hope it’ll raise some always-needed funds for us here at Redwings so that we can keep rescuing horses, ponies, mules and donkeys like Phoenix.”

Locally-made, ethically-sourced, recyclable and 100% cruelty free – all essential criteria for each item stocked - Norfolk Aroma’s candles are popular on the Redwings online shop and at our visitor centres.

Gareth, who has been at Redwings since 2018 and has worked in retail for 23 years, said: “We are really particular about what we sell, and it’s been a real privilege to be able to work with Andrew on Norfolk Aromas over the past two years.

“I really wanted to bring a candle into our range. I came across Andrew and the rest is history as they say. My ethos is for our products to be local, eco and ethical, which we know is important to Redwings’ supporters.”

You can buy a special-edition In Loving Memory of Phoenix candle here, and support Redwings by making a purchase at the Redwings shop here.