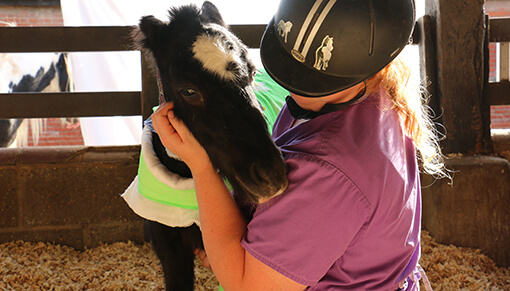 We are beyond devastated to announce that our beloved Phoenix has passed away.

Phoenix, a four-month-old foal, came to the Sanctuary in August with a mix of first, second and third-degree burns covering one whole side of his body having been the victim of an apparent arson attack. Third-degree burns are those where the skin has been damaged beyond repair.

Since his arrival, he had been receiving round-the-clock care from our vet team, which included having to apply bandages to almost his entire body every one to two days.

We’ve been sharing the colourful bandage creations by our vet nurses, but they hid a very distressing picture underneath. We have never published images of the true nature of his injuries as we felt they were simply too horrific to share, but under his dressings his skin had simply fallen away leaving a very painful, red raw surface that was open to infection, and which the vet team were handling incredibly sensitively.

It became apparent in recent weeks that his extensive wounds had healed as best they could and that they would never recover sufficiently to allow him to live a good quality of life in the future unless further intervention was taken.

Without it, it would be likely that Phoenix would have to live in bandages for many, many months, even years, to come and would be left with paper-thin scar tissue that would restrict his movement and his ability to spend time in the sunshine or with other horses. He would never be able to play or exhibit natural horse behaviours and he would always be prone to injury or infection.

After lengthy consultation with burns experts from both the veterinary and human medicine worlds, it was decided that the best option was to give Phoenix a skin graft. This would involve removing a thin layer of healthy skin from his abdomen and using that to create grafts which would be applied to his severe burns. This had to be done while the graft area was at the optimum to give the operation the best chance of success.

On Tuesday 19th October, a leading veterinary surgeon from the Netherlands, who specialises in animal wounds and healing, joined the Redwings vet team to perform the vital procedure at the Horse Hospital.

Very sadly, Phoenix did not recover from the general anaesthetic, which was an essential part of the procedure.

Lynn Cutress, Chief Executive, said: “It’s hard to describe how devastating Phoenix’s loss has been for everyone at Redwings. Since he arrived, our vet team, in particular, had dedicated themselves 24 hours a day to his care and in the process discovered an affectionate little pony with one of the biggest hearts we had ever seen. Simply put, we all fell in love with him, and we all miss him dreadfully.

“It was obvious that he was desperate to live the life of a normal pony his age and we felt he deserved that chance. Performing surgery on any animal carries risks but we knew, and all the experts agreed, that without going forward with skin graft treatment, he would never enjoy the quality of life he deserved.

“We can’t thank our supporters enough for their well wishes and kind donations since Phoenix’s arrival. Everything Redwings does is 100% funded by donations and it was the generosity of the public who enabled us to provide him with the intensive care he needed and kept our amazing vet team going through this very demanding time. We know Phoenix touched the hearts of so many people across the world and we’re so sorry to have to break such terribly sad news to everyone.”

Plans are underway to scatter Phoenix’s ashes in the Memory Garden at our Caldecott visitor centre in Norfolk so everyone has the chance to pay tribute to this very special boy. A permanent memorial will also be placed at our Hapton headquarters, home to our Horse Hospital, where Phoenix lived.

Phoenix was an exceptionally special case, both clinically and in our hearts, but sadly there are many more horses and ponies who have devastating stories like these; this is the upsetting reality of animal welfare work. We are proud to have been able to give Phoenix, and many other horses, the best chance of living a safe and happy life after experiencing terrible suffering thanks to your support.

Rest in peace our dear Phoenix, you’ll forever have a place in our hearts.