Abandoned pony is given a new start at Redwings 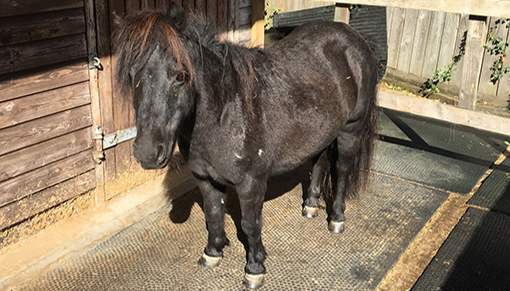 An abandoned pony, whose incredibly painful foot condition meant she could barely walk, has been given a new forever home at Redwings.

Nelly, a Shetland cross who is believed to be about 16-years-old, was terrified to even be touched when she arrived at our Ada Cole Visitor Centre, near Harlow in Essex, on 17th September. While it remains early days in her recovery, she has already come on “leaps and bounds” in her confidence and it’s hoped she’ll be able to enjoy a happy new life at the Sanctuary for years to come.

Nelly was rescued on 31st August by the RSPCA, alongside a vet from House and Jackson Veterinary Clinic, from an area of grassland at Mar Dyke, near the Queen Elizabeth Bridge, following a call from a concerned member of the public. Poor Nelly, who also has only one eye, was in obvious discomfort from laminitis - a very painful hoof condition - and was struggling to place one foot in front of the other.

Believed to have been abandoned for some time, she was taken to House and Jackson where she received treatment, including a much-needed foot trim and pain relief, funded by the RSPCA. After no owner came forward to claim Nelly, Redwings offered her a new home where she will be able to receive the specialist care she will need for the rest of her life.

Jo Franklin, Senior Field Officer, said: “When I first went to visit Nelly at House and Jackson shortly after her rescue, she was in too much pain to move and was so scared that if you touched her she would go rigid and start to shake, showing how long she must have lived without human contact. Her missing eye also looks like it has been professionally removed so she was obviously cared for by someone in the past.

“Now after lots of TLC from the vets, she can move around more comfortably. And while she is still very nervous, since arriving at the Sanctuary her confidence has come on leaps and bounds. She loves to talk to her carers and her sweet personality is starting to shine through.

“Being partially sighted and with her feet needing specialist attention, it would be very difficult to find Nelly a home where she could receive all the lifelong care she requires, so we’re delighted to be able to give her a second chance at the Sanctuary and provide her with that peaceful and safe forever home she’s been missing.”

RSPCA Inspector Jessica Dayes, said: "Poor Nelly was in terrible pain when myself and colleague animal collection officer Joe White were called to help her.

"We believe she had just been abandoned and it was clear she was in desperate need of urgent veterinary care. She was nervous of being caught, and it took a lot of patience to get near her.

"Nelly is such a sweet girl and responded well to the veterinary treatment, I am so pleased that thanks to the efforts of everyone involved she has now been given a second chance and it's wonderful that she can now enjoy her retirement in such a wonderful place as Redwings."

Help Redwings give more ponies like Nelly a second chance