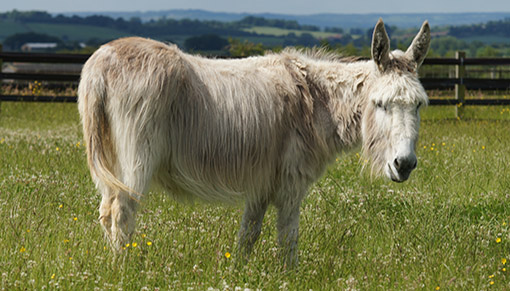 We’ve sadly had to say a heart-breaking farewell this month to two much-loved and incredibly popular donkeys, Gloria and Jessie.

Twenty-seven year old Gloria, with her famously shaggy coat, was a well-known character at Redwings Oxhill in Warwickshire. She was rescued in 2009 with her companion Brecon when the pair were found in an appalling condition; Gloria’s hooves were so overgrown she spent her first few days after the rescue lying down as it was too painful to stand.

With lots of TLC and a real fighting spirit, Gloria enjoyed a wonderful nine years at Redwings forming lasting bonds with Leah and Adoption Stars Timothy and Cain. However, recently she had been plagued by lameness issues, and on 11th April our vets made the difficult but kind decision to put her to sleep.

Sadly, the following day, we also said goodbye to Jessie from Redwings Ada Cole in Essex. She had been suffering from severe degenerative joint disease in both of her front legs and our vets were no longer able to keep her comfortable.

Twenty-two year old Jessie arrived at Redwings in 2010 with her son Rodney and Adoption Star Del Boy when the education centre where they lived was forced to close. Jessie’s love of cuddles and playful antics with her donkey pals made her a hugely popular resident.

We know the loss of these two lovely long-eared ladies will be felt by everyone who was lucky enough to meet them. RIP Gloria and Jessie, we will never forget you.