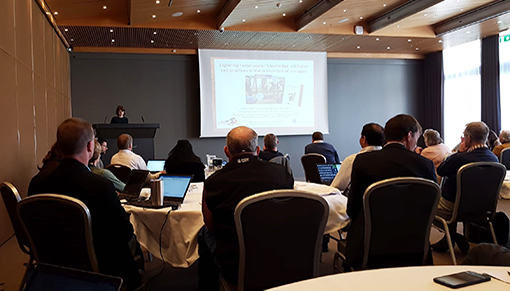 Representatives from Redwings joined leading scientists and vets from across the world in Iceland to discuss their experiences of the infectious equine disease strangles.

We were one of just two UK-based organisations invited to present at the three-day Dorothy Havemeyer Foundation Workshop held in Reykjavik in May.

The renowned Foundation conducts scientific research to improve the welfare of horses, and hosts global workshops bringing together the top researchers on the pre-eminent health topics of the day.

The latest workshop focussed on emerging research into strangles – the UK’s most prevalent infectious disease with 600 outbreaks per year.

In recent years, we've expanded our award-winning campaign to eradicate strangles across the country with our Stamp Out Strangles Pledge and practical online advice, with the aim being to raise biosecurity standards and tackle the stigma still sadly associated with the disease.

Head of Welfare and Behaviour, Nic de Brauware, presented on our screening process, in particular its treatment of horses that secretly harbour the disease – known as “carriers” – which has been successful in preventing strangles present in new arrivals being passed to the Sanctuary’s 1,500 rescued horses and donkeys

Meanwhile, Education and Campaigns Manager, Andie Vilela, presented the findings of Redwings’ strangles survey, published in 2017, which assessed horse owner knowledge, attitudes and practices in the prevention and management of the disease. Completed by over 2,000 people, the survey is believed to be the first of its kind.

Andie said: “The workshop was a fantastic opportunity to hear the latest scientific evidence on strangles. It was inspiring to be amongst such a diverse group of researchers who are all working hard to help everyone get one step ahead of this disease.

“It was also a great opportunity to revisit and share findings from our own strangles survey. It stimulated a lot of conversation about the importance of going beyond simple awareness raising campaigns to actually motivating people, particularly those who have yet to experience an outbreak of strangles, to make good biosecurity the norm.”

To find out more about our Stamp Out Strangles campaign and how you can support it, click here.