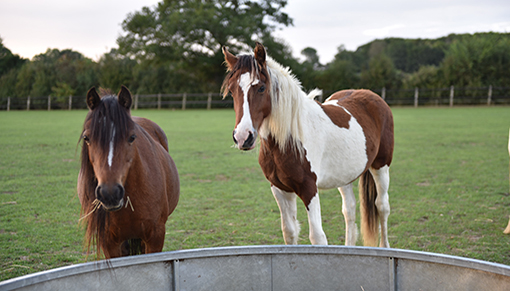 You may remember us telling you about two ponies who were rescued from South Wales earlier this year and came to live at Redwings.

Semi-feral Welsh cross ponies Heidi, who is about four years old, and Harvey, who was just nine months old when rescued, arrived at the Sanctuary in June.

The pair were initially rescued back in February when a community group, called Hungry Herds, contacted us with their concerns after both were spotted looking extremely thin.

Our Head of Welfare and vet Nic de Brauwere travelled to the area and, alongside representatives from RSPCA Cymru, Caerphilly Borough Council and other welfare organisations, managed to locate and safely round-up the ponies over two operations.

As neither were microchipped, Heidi and Harvey were taken into RSPCA care for immediate treatment while appeals were made for their owners to come forward.

After no-one came forward, we decided to offer them both a new home at the Sanctuary and, once they were well enough to travel, they made their way to our specialist quarantine facility in Norfolk.

Due to court closures as a result of Covid-19, the process to legally sign over the pair into our ownership has been delayed, but we wanted to share with you some recent photos of them enjoying their new lives at the Sanctuary.

Heidi and Harvey have now moved to one of our Norfolk sanctuary sites where they are making new friends and becoming more used to human interactions.

We hope to also be welcoming another pony soon, who was rescued from Gelligaer Common in similar circumstances last month, known locally as Picasso.

He currently remains in RSPCA care while the legal process to sign him over into our ownership gets underway. We look forward to bringing you more news about him once he has arrived.