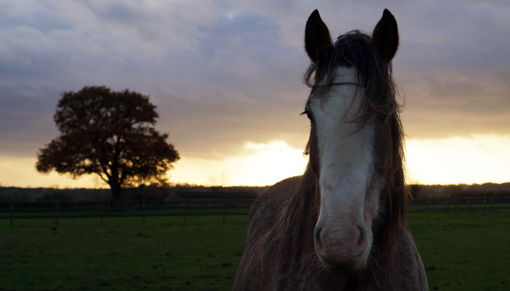 Cowslip was rescued in June at this year’s Appleby Horse Fair having been found by RSPCA Inspectors malnourished, injured and near collapse from exhaustion.

Checks by Redwings’ vets, who attended the fair revealed she had infected mouth sores, which were suspected to have been caused by an ill-fitting or overused bit and which had led to her face swelling up. She also had severe harness rubs, and very sore withers and back.

There were also apparent problems with her pelvic joints and her shoes were so old that farriers on site said they provided the same amount of grip as a pair of ice skates!

When no-one at the fair came forward to take responsibility for her, Cowslip was seized by the police and signed over into the care of Redwings.

Following treatment and lots of TLC at our vet unit in Norfolk, she has recovered well and has flourished into a confident and friendly pony who adores cuddles – making her the perfect addition to our Oxhill Visitor Centre. 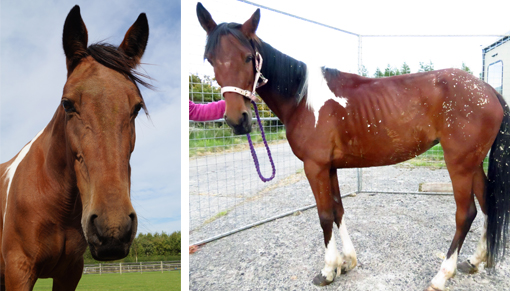 Meanwhile, handsome Buddy had been living at our Norfolk headquarters since 2015 following a request from his previous owner who was struggling to cope with the specialist needs of heavy horse.

Due to his care requirements and the rare breed status of the Clydesdale horse, Buddy was welcomed into the Sanctuary.

When his field mate sadly passed away in November, the Redwings equine care team knew he needed to find a new friend and paired him with Cowslip.

The two formed a quick bond and it was decided that they should enjoy a new life together at Redwings Oxhill where the centre’s equine care team have particular experience of looking after heavy horses such as Adoption Star Major, a Shire Percheron cross, and former police horses Nesbitt and Sullivan.

If you drop by the visitor centre this winter, make sure to give them a welcoming cuddle!

Redwings Oxhill, which is 10 miles south of Stratford upon Avon, is open every Friday, Saturday, Sunday and Monday, 10am to 4pm (closed Tuesdays, Wednesdays and Thursdays). Entry and parking are free, and dogs on leads are welcome too.

If you've been touched by Cowslip and Buddy's stories, you can also donate to help us help more horses in need just like them. We are a 100% publicly funded charity, so every penny you donate really does make a difference.

Help us help more horses like Cowslip and Buddy