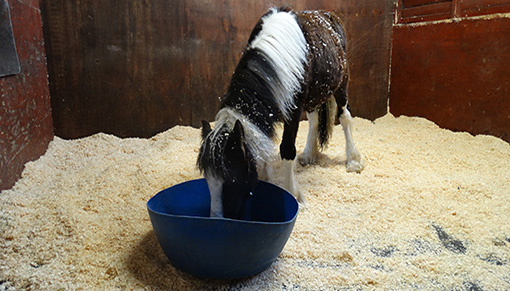 A six-month-old pony, believed to have been dumped beside a busy road in Norwich, is receiving urgent veterinary treatment at Redwings

The young colt, who has been named Buddy, was discovered very underweight, with his hooves in a poor condition and suffering from a severe worm burden. He was also extremely nervous.

However, while it remains early days in his treatment, our veterinary team believe he was found just in time and should go on to make a full recovery.

Norfolk Police were called to the A140 Ipswich Road, just outside the Holiday Inn near Harford Bridge, in the morning of Saturday 11th May, after Buddy had been spotted straying dangerously close to the busy road.

Due to our expertise in horse handling, Norfolk Police called upon the charity, whose headquarters are based south of Norwich, for help. Redwings Senior Field Officer Julie Harding arrived and, together with the police officers, managed to catch Buddy and transport him to the Sanctuary, where he was immediately provided with a cosy stable, food and water.

Thanks also to Kayleigh, a member of our equine care staff, who happened to be driving by at the time and stopped to assist with bringing Buddy to safety.

With no owner sadly able to be traced, Norfolk Police have now signed over ownership of Buddy to Redwings where he has been pledged a safe, forever home.

Julie said: “Poor Buddy has been through a terrifying ordeal. To have been dumped on the side of a busy road, endangering not just him but road users too, and especially when he was so ill and young, is appalling.

“Due to the danger Buddy was put in and his poor health, there was no question that he needed to be brought into the safety of the Sanctuary, where he’ll receive all the care he needs for life.

“For the first few days at Redwings, Buddy was very fearful but he is slowly learning to trust us. He is still going through our own veterinary assessments, but we’re hopeful he will make a full recovery.”

A donation of £10 could fill a stable with warm bedding for a poorly pony, like Buddy, while £250 could fund a month’s care.

To support Buddy and his fellow rescued residents at the Sanctuary, call 01508 481000 or donate below.

You can help rescued ponies, like Buddy, in their recoveries.