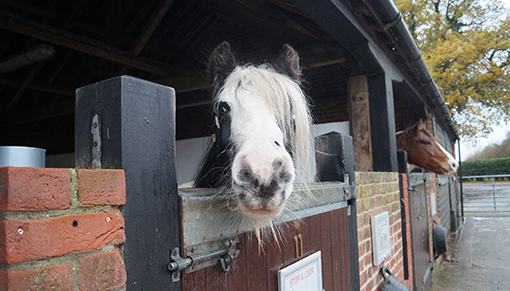 Our equine carers are celebrating after a rescued pony was finally discharged from our Horse Hospital after five years!

Ten-year-old cob cross Audrey is slowly being introduced to a new herd after years of individual turn-out while she received intensive treatment for the serious hoof infection canker.

At one point, it was decided that the kindest thing to do would be to put her to sleep, but tenacious Audrey continued to defy the odds and, after much patience and determination shown by her carers, her condition eventually went into remission.

After spending a couple of weeks sharing a fence line with her prospective new fieldmates - fellow cobs Clarence and Fleetwood – it was clear positive relationships were being formed, so we took the decision to turn them out together this week.

Watch the video below to see how excited Audrey is to be turned-out with her new friends for the first time!

Veterinary Surgeon, Sarah Prior, who is based at our Horse Hospital, said: “Seeing Audrey out in a paddock, making new friends, has brought a tear to quite a few people’s eyes!

“We honestly thought she may never leave the Hospital as that was the only way we could keep on top of this terrible infection she had. Audrey even had her own specially-designated care paddock and stable as she was such a long-term resident – she kind of became the Hospital mascot! Everyone loved her so much, but we were desperate for her to have friends.

“Especially in the times we’re living in right now, knowing – however long it’s taken – that we’ve been able to turn her life around and to see her so happy, has been an incredible lift for everyone.”

Audrey was rescued in 2014 from horrific conditions at a site in Wales, where hundreds of horses were found stranded deep in mud without any food, suffering from malnutrition, worms and infectious diseases.

Shortly after starting a new life at the Sanctuary, her carers reported her to our veterinary team in January 2015 when it appeared she was suffering from a mild infection in her two front feet. They used topical treatments to soothe the condition, but just a few weeks later, Audrey was back before the vets with her feet looking much worse. It was then that she was diagnosed with canker.

Farriers were called in to remove as much of the infected hoof tissue as possible, but the canker returned. So in August 2015, Audrey underwent a general anaesthetic to strip back her hooves even further and her stay at the Hospital began. Just six months later however, she had to have more abnormal tissue removed from one hoof under a standing sedation.

Sadly, with all treatment options being exhausted, it was agreed in 2016 that Audrey would be given a final summer to enjoy some peaceful turn-out and then she would be put to sleep due to the impact her condition was having on her quality of life. As there is a risk that canker could be contagious, she was given her own stable and special care paddock at the Hospital, between which she split her time.

Sarah said: “Canker is a very frustrating disease as some cases fail to respond to surgical or medical treatment. When we decided to give her one last summer, we simply dressed her hooves every day, treated them with iodine, put her in some protective boots and kept an eye on her. Then, to our surprise, her condition started to stabilise.

“We were very sad that she was on her own as we like all the horses to be in herds where they can exhibit their natural behaviours, but she seemed so content that it became difficult to justify putting her to sleep. If she had been miserable, then it probably would have been another story, but we decided to keep monitoring her and that’s what we continued to do for the next few years.”

During this time, our Behaviour specialists worked closely with the veterinary nurses to help Audrey stay as relaxed as possible during her numerous assessments and treatments, as well as provide advice on enrichment activities.

Then, in 2019, to everyone’s amazement the canker looked like it was starting to clear up. Over the next year, the veterinary team slowly began to withdraw from dressing Audrey’s hooves and started looking for some suitable friends for her. Then, in March this year, they were finally able to introduce her to Clarence and Fleetwood and bid her an emotional farewell from the Hospital. 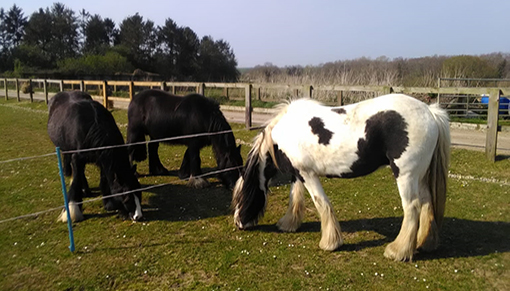 Audrey gets to know Clarence and Fleetwood.

Lynn Cutress, Chief Executive, said: “The love given to Audrey by our veterinary team and equine carers has been extraordinary and I’m so proud of everything they’ve done for her. To dedicate five years to treating a pony, with no real end date in sight at one point, shows the incredible extra mile our teams go to ensure our rescued horses enjoy the happy lives they deserve, often after such terrible neglect. I’m going to miss seeing Audrey in her special paddock every day, but I can’t wait to hear about her new life with her friends!”