Joint NEWC statement: Why everyone must act within the law 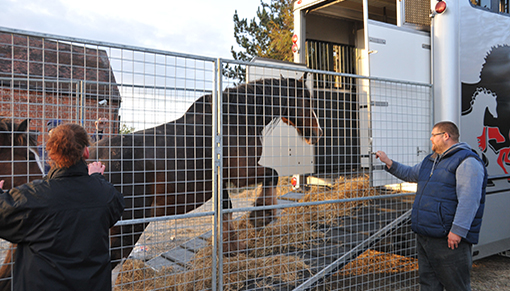 As a member of the National Equine Welfare Council (NEWC), which our Head of Welfare and Behaviour is Chairman of, we work together closely with other equine welfare organisations to help horses in desperate need.

Over the years, your reports of concern to our Welfare line and other charities have led to hundreds of neglected horses being brought to safety, for which we are incredibly grateful.

In carrying out rescues, however, welfare organisations – such as ourselves – must act within the law. Sadly, work to secure safe homes for rescued horses and investigate their owners can be negatively impacted by well-meaning “rescuers” who take matters into their own hands and remove horses from situations unlawfully.

We have contributed to a statement from NEWC explaining the law and the unfortunate consequences that come about when it’s not followed, which can be read in full below:

We are increasingly seeing instances where well-meaning animal lovers wrongly accuse charities over social media of failing to act, resulting in rising tensions and, in some cases, leading to people taking the law into their own hands to ‘rescue’ ponies and horses which they feel charities are ignoring.

The National Equine Welfare Council, comprised of 66 member organisations of which 35 are charities keeping equines, such as the RSPCA, World Horse Welfare, Redwings, Blue Cross, Bransby Horses, The Horse Trust, The Donkey Sanctuary and The British Horse Society who work tirelessly to protect horses across the country and for seven years have been facing an ‘equine crisis’ which has seen an unprecedented number of animals coming into their care (2295 admitted in 2018). It is estimated that there are currently 6,870 horses in the care of rescue organisations, putting huge pressure on charities’ resources. We are all doing our best for horses in difficult circumstances.

In many cases, when issues are raised on social media, charities are already working, often together, to resolve the situation and improve welfare through existing animal welfare law. NEWC understands that it is frustrating when it appears well-known welfare organisations are not taking action and don’t share information about what they are doing, but there are very good reasons for this.

● Charities have to be careful that anything they say doesn’t jeopardise future court cases, which could result in those who have caused suffering to animals escaping justice.

● Charities must work within the law and have NO legal power to remove horses without an owner’s consent. Horses can only be removed under the Animal Welfare Act by police, local authority appointed inspectors or appointed staff from the APHA (In Scotland the SSPCA inspectors have these powers) and only with the approval of a veterinary surgeon. If the appointed veterinary surgeon does not approve removal the animals must, by law, remain in situ with attending charities then only able to monitor the situation.

● To protect the integrity of any investigation, essential for successful legal action, removal of animals by an authorised Inspector is done on the advice of a vet who has carried out the necessary examinations. Failure to follow the correct procedure could result in staff and organisations being prosecuted for theft. These actions could also jeopardise any legal action to protect the animals, or result in animals having to be returned.

● Charities are very restricted in what they can say publicly about individual cases due to strict data protection laws. These laws protect all UK citizens’ privacy as well as ensure that the legal process is fair, essential to securing a successful outcome. Breaching these laws could result in animal welfare charities incurring fines of several million pounds.

● The Animal Welfare Acts are very effective at allowing animals to be protected from cruelty and neglect and helping animals that have already suffered. Where the laws need to be improved, we campaign to change them, as seen with the Control of Horses Act and sentencing changes in England and Scotland. If the law is used to its full potential we can also work with owners who are willing to make welfare improvements, but still have the ability to act if this doesn’t work. The aim of this approach is to help all animals in a situation and not just those we are able to remove.

Often charities are aware of welfare concerns and will be working with owners to resolve issues in the first instance, while being mindful that legal action may follow if welfare concerns persist. Please be assured that in many cases work is taking place behind the scenes, sometimes involving multiple charities, but they simply cannot speak publicly about it.

There have been instances recently where NEWC members have arranged for the police and a vet to attend with a view to removing a horse on welfare grounds, but find the horse has already been taken. Although such actions can be well-meaning, it can have the unfortunate consequence that the owner will not face justice and could go on to cause suffering to more horses.

Where horses do need urgent help, it is important that they are removed legally and put into specialist care. The chances for survival and a good life can often depend on how these animals are treated in the early days after rescue. Cases of further suffering and even death have been seen when horses were removed illegally.

Just like all animal lovers, we too are upset by terrible images and videos on social media, and there’s no doubt many need urgent attention. Be aware that some information on social media is not always true. Sadly some cases shown in pictures and videos are not accurately reported or are not from the case in question and achieve little more than causing upset and frustration.

Anyone with welfare concerns about horses should contact our members in the first instance. There’s a list of numbers to report welfare concerns to on our website. Encouraging people to ‘bombard’ charities on social media or tie up emergency phone lines reporting the same incident costs charities vital time and money which could be spent helping animals and also stops other emergencies being reported.

It’s great to see horse lovers’ passion and enthusiasm for helping equines. We share this, and do the best we can with limited resources- animal welfare charities receive no government funding. We’d encourage organisations and individuals interested in helping horses to become members of the National Equine Welfare Council - which is a great way of sharing expertise and working together to tackle the horse crisis and other equine welfare issues.

You could also help by giving a loving forever home to one of the over 2,500 horses available for rehoming in the care of our member charities at the moment - which will free up a much needed rescue space for other horses who need urgent help.

For further information on how to report a welfare concern, including all the vital details our Field Officers need, please click here.