Redwings assists in round-up of 43 horses in Wellingborough 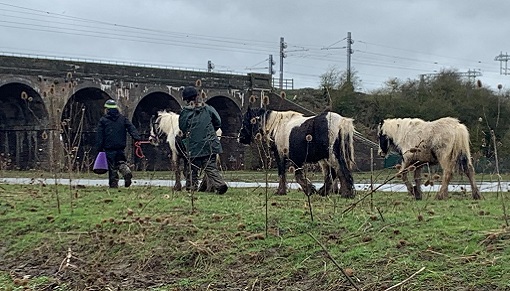 Redwings joined the RSPCA and fellow equine welfare charities to help carry out a large-scale round-up of 43 horses in Wellingborough on Monday 24th February.

We sent six members of staff and 30 pen sections to assist with the operation, led by RSPCA officers, which was also supported by World Horse Welfare, The British Horse Society, Bransby Horses, Blue Cross, Northamptonshire Police and Wellingborough Borough Council.

The action followed unsuccessful attempts to locate the horses’ owners following reports of concerns for their welfare.

The multi-agency team, with the assistance of the RSPCA’s specialist water rescue team and the boat team, battled through tough weather conditions to coax the horses across the flooded fields and into make-shift pens.

The horses were then fed hay and given water while they were examined by a team of vets checking for any immediate medical concerns. Some of the horses, which included adults and youngsters, were found to be very thin and were not used to being handled.

They were then loaded into transporters and taken in the care of the RSPCA and World Horse Welfare. It is hoped they will be rehomed once they have been nursed back to good health.

RSPCA Chief Inspector Jim Lucas, who led the operation, said: “I am very pleased that this has been such a successful operation thanks to the close working relationship with all partner organisations.

“It was a difficult task as it is such a big site with lots of hazards such as a river, lake, flooded fields and a railway line going across the site - but the team came together really well and we were able to safely rescue 43 horses.

“None of the animals were micro-chipped so we are unable to identify and locate their owner to hold them responsible. But it is great that all the horses will now be cared for and will then be re-homed.”