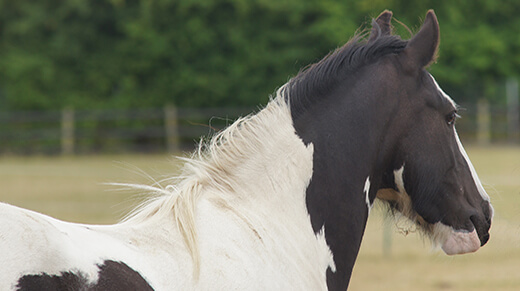 In the latest edition of Welfare Corner, Beth explains what we mean by 'spooky' horses and what we can do to help horses feel calm in their environment.

Spooking is a common term for when a horse has a fear reaction to something – it can be anything from movement in a nearby hedge or a loud noise, even to one of their friends spooking first. A 'spook' can be a horse moving suddenly, jumping like someone who’s just been scared, or it can be a full flight response, with the horse running away from what’s scared them.

It’s not a conscious reaction in the way we might think, but an instinct which has been developed to allow horses to flee danger and survive in the wild. Because of this, horses can seem to spook at anything – for some, it might take something very scary to make a horse jump, but for others, it can be something as simple as a bird taking off. Plastic bags and litter moving in the wind are commonly mentioned when describing horses who will “spook at anything”.

Why do horses 'spook'?

A horse’s perception of their environment goes far beyond what a human perceives. With a nearly 360 degree field of vision, 50% greater magnification than human eyes, and extreme sensitivity to movement, horses are capable of monitoring a large amount of space very closely for any sign of a threat. When a horse reacts to something that we can’t see, it’s a common reaction for humans to believe that the horse is 'spooking at nothing' – it’s far more likely that the horse is spooking at something we’re not aware of.

In terms of brain structure and function, the part of the brain which deals with planning ahead, impulse control and decision making is much smaller in horses than it is in humans. Horses rely much more on their natural instincts which have evolved over time to increase their chances of survival – the difference between being attacked by a predator and getting away safely is a few seconds of thought.

That being said, most horses do not default to running every time something unusual happens. Their brains are much faster at processing a potential danger and reacting to it – it’s often said that by the time a human has registered startling stimuli, the horse has already taken flight.

What to do if a horse spooks?

It’s important to always be aware of a horse’s body language when interacting with one. They are extremely communicative animals, and are often trying to tell us things we don’t notice or can’t understand. Some horses are very obvious about their fear – head raised, ears focused, tense body – while some are more subtle. Things can take a horse by surprise, and your reaction can often be the reason why they choose to stay and investigate, or run.

If a horse is spooked by something, it is important to remain calm. Horses are good at picking up on subtle human behaviour and body language, so if you panic, it can scare them even further. If the horse becomes unsafe, it is very important you remove yourself from the situation so as not to get injured. If appropriate, give the horse time to investigate what it is that’s scared them – they will decide whether or not the stimulus is scary, and whether their curiosity is satiated or if they still need to run away.

As always, being calm and understanding with horses is the best way to help them. Try to think about how their mind is working, and not dismiss the behaviour as naughty or silly – to them, it is a real danger and needs to be treated as such. Don’t lose your head, or your temper, and allow the horse to come to a conclusion on its own. If you need a horse to ignore a particular stimulus, moving forward with ethical, scientific-based training is the best way forward – not brute force. Anything negative a horse experiences in relation to spooking is likely to reinforce their reasons to be concerned, and make their anxiety even stronger when faced with a similar situation in the future.

Introducing your horse to as many novel objects as possible in a safe, familiar environment using positive reward-based training will set your horse up so that when he is faced with new and novel objects or environments, he will approach these with much more confidence and curiosity.