Join Tinkerbell for her 10th birthday! 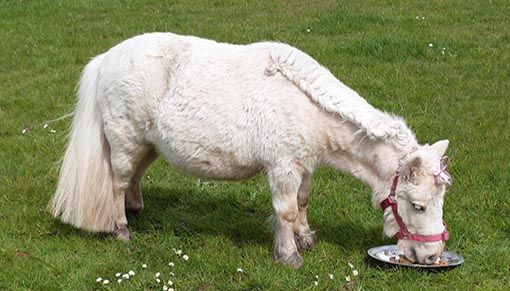 Adorable Adoption Star Tinkerbell will be celebrating her 10th birthday with a special party at our Ada Cole Visitor Centre in Essex – and everyone is invited!

Not only will Tinkerbell be celebrating hitting double figures, we will also be marking the 10th anniversary of her mum Elsie’s rescue from the notorious Spindle Farm, Amersham, where she and over 100 other horses and donkeys were kept in horrifying conditions with very little food, water or vet care.

Due to her mother’s unthinkable neglect, Tinkerbell was very poorly when she was born and Redwings’ vets were not sure she would pull through. They had to scan her abdomen every day to make sure she was getting better, and the easiest way to scan her stomach was to lay her down and tickle her tummy.

Today, Tinkerbell – who can be sponsored for £15 per year as part of our Adoption Scheme - is a healthy and happy pony who still loves to roll over and have her tummy scratched by her carers!

Everyone is invited to join Tinkerbell for her 10th birthday party at Redwings Ada Cole, near Harlow, on Sunday 8th April from 11.30am.

Tinkerbell as a foal with mum Elsie

On Tinkerbell’s big day, visitors will have the chance to enjoy cuddles with the birthday girl herself, join in with party games and a quiz trail, and watch her tuck into her very own birthday cake!

Lynn Cutress, Chief Executive, said: “Looking at her now, it’s hard to think what would have happened to this beautiful little pony if Elsie had not been rescued from Spindle Farm just in time.

“Despite her uncertain start in life, Tinkerbell has grown into a healthy and friendly pony who loves nothing more than a fuss and a cuddle – it’s no wonder she has so many fans!

“I’m sure she can’t wait to party with her adoring supporters and we hope as many people as possible will be able to come and celebrate her big birthday with her.”

We hope you can make it!