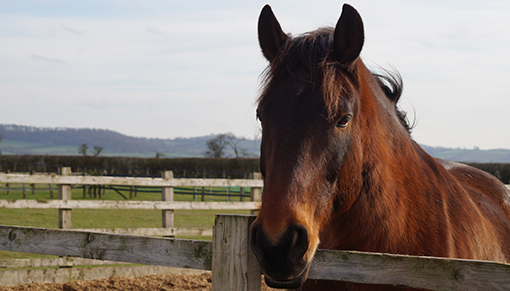 We're very sad to announce that at the end of September we said goodbye to gentle giant Sullivan (known to many as Sully), who lived at Redwings Oxhill in Warwickshire.

His passing due to sudden and severe onset lameness has come as a shock to the team and his carers at Oxhill, who like many of our supporters, were very much in love with this special boy.

Sully arrived at Redwings in 2014 from the South Wales Mounted Police division. Towards the end of his time with the Police, Sully developed some lameness issues, which meant that he needed to be retired. Sully’s friend Nesbitt had already been offered a home at Redwings due to suffering with degenerative joint disease, and so it was time for the boys to be reunited.

After settling at the Sanctuary, 17hh Sully - who was an unusual mix of Thoroughbred, Percheron and Suffolk Punch - built up quite the fan base alongside his paddock pal, former Adoption Star Major, who sadly passed away in 2019.

Sully’s lameness issues were closely monitored and managed by his carers over the past six years and he also began receiving pain relief for arthritis. While he had been comfortable, at the end of September he suddenly went very lame and an x-ray revealed that he’d fractured some cartilage and his arthritis had deteriorated.

No longer able to keep him comfortable, the devastating decision was made to put Sully to sleep to ensure that he did not suffer any further. He was 16 years old.

Those that have visited Redwings Oxhill and met Sully will know he was a big horse with a big character and the team are incredibly saddened by his loss.