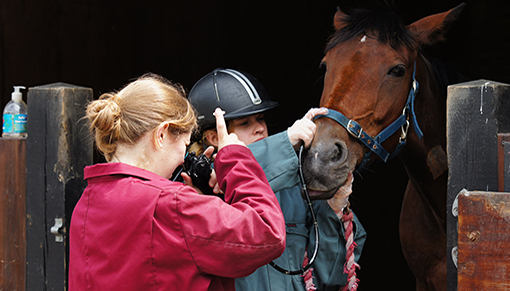 Redwings is one of a number of leading equine organisations, vets and scientists from across the world who have contributed to the largest ever study of its kind into the global spread of the disease strangles.

The study, which used the latest DNA sequencing techniques to track the bacteria Streptococcus equi, which causes strangles, was published today in the journal Microbial Genomics.

Strangles is the most frequently diagnosed infectious disease of horses, with 600 outbreaks estimated to occur in the UK each year. Streptococcus equi invades the lymph nodes of the head and neck, causing them to swell and form abscesses which can prove life-threatening in severe cases.

Some of the horses that recover from strangles remain persistently infected, known as carriers. These apparently healthy animals shed bacteria into the environment and spread the disease to other horses with which they come into contact.

Prof. Matthew Holden, of the University of St Andrews, said: “Using standard diagnostic testing, the Streptococcus equi strains look almost identical, however by carefully examining the DNA of the bacteria, we have been able to track different variants as they spread across the world.

“Piecing the puzzle together, we showed that cases in Argentina, the United Kingdom and the United Arab Emirates were closely linked. Along with other examples, we provide evidence that the global trade and movement of horses is helping to spread the disease.”

Redwings routinely tests all new arrivals to the Sanctuary for infectious disease, including strangles. For the ground-breaking study, we contributed years of samples from positive strangles horses, joining other equine and veterinary institutions across the world, as-far reaching as Japan, Australia, the United States and Saudi Arabia.

Building on the global data collected, an online surveillance platform for strangles called Pathogenwatch has been developed enabling labs to upload and intepret their data in close to real-time. It will be used to monitor the emergence and spread of new lineages to help decide the best ways to deal with them.

Dr Andrew Waller, of Intervacc AB, added: “This has been an incredible team effort, which was only possible through the collaboration of leading researchers from 29 different scientific institutes in 18 countries.

“Horses are transported all over the world as they move to new premises or attend competitions and events. New cases of strangles can be prevented by treating carriers before they pass on the bacteria. This new research in the field of strangles and the new online Pathogenwatch resource provide an opportunity to track the course of infections, reining-in Streptococcus equi’s globetrotting lifestyle by shutting the stable door before this horse pathogen has bolted!”

From 3rd to 9th May, we will also be co-hosting a national week of action – Strangles Awareness Week – encouraging more people to share their experiences of strangles.

If you’d like to become an Ambassador and help us promote messages about strangles during the Week, please email campaigns@redwings.co.uk to find out how you can get involved.