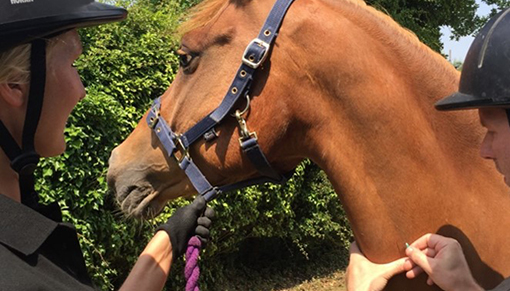 Two papers published in 2020 have raised questions about how reliable iELISA blood tests are in helping to identify a horse who may be a strangles carrier.

It is widely understood that horses can show an immune response to strangles by producing antibodies after being exposed to the bacteria that causes strangles, without being actively infected or a carrier. For this reason, it is important to follow up positive or moderate blood test results with guttural pouch endoscopy to visually check the pouches and take samples for more targeted testing.  Only this process will determine whether the horse is producing strangles antibodies because they are a carrier. This means that, while blood tests can narrow down the number of horses who should go on to be tested using guttural pouch endoscopy, they are not a diagnostic tool in themselves.

However, the two recent studies suggest that some horses who are strangles carriers may not produce antibodies for the highly sensitive iELISA test to find. One of the papers also raised questions about a lack of chondroids, empyema or other visible indicators of guttural pouch pathology in horses classed as strangles carriers.

New strangles research is much needed to advance our understanding of the disease. However, as is often the case, in addition to offering invaluable data and insight from outbreak situations, the study findings raise additional questions that remind us of the complexity of both strangles itself and horses’ immune response to it.

What is a strangles carrier?

One of the key questions is when we should class a horse as a strangles carrier. The qPCR test used to detect strangles DNA is incredibly sensitive, potentially able to pick up tiny particles of DNA in a horse.

The ability of horses to remain infectious for a period of weeks or months after strangles symptoms have resolved makes classification of true strangles carriers more difficult. At what point does a horse move from a prolonged recovery phase to being a carrier?

Identifying strangles carriers in groups of horses that have previously recovered from this disease is much more challenging when disease is able to continue circulating among a herd. This is because a true carrier can discretely shed the strangles bacteria, which exposes other horses who can become infected briefly, but whose strong immune response allows them to fight off the strangles bacteria and prevents them from showing signs. A similar scenario may be found on busy yards with a high turnover of horses.

Finding consensus on how to define and diagnose a strangles carrier will be a vital step in our practical understanding of the disease, and help establish a consistent framework for interpreting research on this important topic.

Redwings’ veterinary team has used guttural pouch endoscopy to test every new horse to arrive at the Sanctuary for strangles (and every horse returning from a Guardian home) for almost 20 years. This amounts to well over 3,000 equines.

Our vets regularly identify strangles carriers through screening, showing how important the programme is to prevent the incursion of disease into the Sanctuary. Between 2011 and 2015, for example, more than 50% of the 87 horses who tested positive for strangles on arrival at Redwings had no signs of ill-health and were deemed to be carriers, as opposed to those with symptoms of infection, or judged to be in the recovery phase of the disease.

Redwings will continue to use guttural pouch lavage as the gold standard method of strangles testing, providing faster, more accurate results and allowing for immediate intervention in cases where chondroids are present in the pouch.

While blood tests are inherently more limited, they are perhaps most useful in a strangles outbreak situation to help identify horses who may have been recently exposed to the disease. This is borne out by the finding in one of the recent studies that seropositivity was significantly associated with carriers when tested at six months. We found that 26 of the 28 horses (93%) that had strangles in the outbreak at Redwings during 2015 tested positive using the iELISA blood test and that the majority of these horses (14 of 16 (54%)) tested negative again within eight months of the outbreak resolving. We knew that no carriers were present on our premises due to post-infection guttural pouch endoscopy checks.

The iELISA blood test is extremely sensitive to strangles antibodies, with more than 93% accuracy in detection of antigens A and C. These antigens were most commonly produced in response to strangles when the test was developed just over 10 years ago. However, the strain of strangles which is currently dominant in the UK appears to be less able to trigger a response to Antigen C (SeM).

However, work is already underway to update the strangles iELISA blood test. As diseases evolve, mutate and different strains circulate, the need to review and update tests, treatments and vaccinations is constant.

Few if any clinical interventions ever achieve 100% effectiveness. Flu vaccines in humans, for example, are generally estimated to be around 50% effective. In addition, activity in the immune system is nuanced and changeable, making interpretation of test results challenging. It has always been recommended that paired serology tests are carried out to provide more information, and the patient’s history and environment is equally important to put test results in context.

Far more research is needed to help us assess the value of strangles blood tests and support the development of a new generation of tests. In the meantime, we can remember that blood tests have led to the detection and treatment of many strangles carriers. Guttural pouch endoscopy and lavage remain the gold standard for carrier diagnosis and treatment, but while we encourage more widespread use of scoping we still need to view blood tests as offering a far better chance of detecting potential strangles carriers than carrying out no tests at all.

For more information, the two studies are available online at: