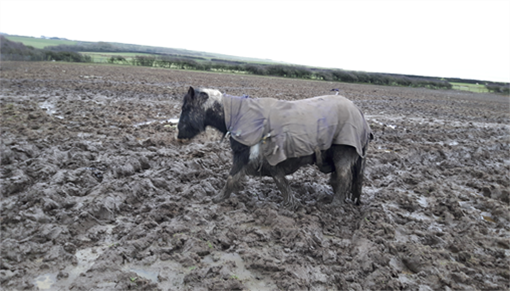 A horse trader and breeder has been convicted of causing unnecessary suffering to horses and sheep following a successful prosecution by the Vale of Glamorgan Council.

Thomas Tony Price was found guilty of 32 counts, including failing to ensure a suitable environment for animals at Merthyr Tydfil Magistrates’ Court and sentenced to six months in prison.

He was also banned for life from keeping any animals after a history of prosecutions for mistreatment that had previously seen him receive a five-year disqualification.

Price’s co-defendant, Luanne Bishop, had previously pleaded guilty to 31 of the charges and was sentenced at the same hearing to a 12-week custodial sentence, suspended for 12 months.

She will have to wear an electronic tag for that period and be subject to a night-time curfew between 9pm and 6am. Bishop was also disqualified from keeping any animals for life, except for a number of specified pets.

Nic de Brauwere, Redwings’ Head of Welfare & Behaviour and Senior Veterinary Surgeon, who assessed some of the horses and presented evidence to the court, said: “I witnessed first-hand the shocking conditions and desperate lack of care at these sites, which included ponies with untreated wounds, not enough food and water and many that were severely underweight living in totally unsuitable conditions.

“I am therefore very pleased and relieved to see a successful prosecution and robust sentencing, which will prevent more horses facing neglect at the hands of these individuals. This is by no means the first case Redwings has dealt with involving horses from this owner and the sheer amount of charity time, energy and resources that we have invested in protecting these animals over the years is difficult to put into words.

“We'd like to offer our sincere thanks to the councils of the Shared Regulatory Services from Bridgend, Cardiff and the Vale of Glamorgan, who persisted with this crucial case throughout the past year, despite challenges presented by the pandemic. And to our fellow welfare charities who have supported us every step of the way. Efforts are now underway to rehome the horses, who have since been brought back to full health.”

The case was brought to trial under the Animal Welfare Act by Shared Regulatory Services, the body responsible for providing Environmental Health, Trading Standards and Licensing functions across the Bridgend, Cardiff and Vale of Glamorgan Local Authority areas and related to three locations across the Vale and Bridgend.

In August 2019, Animal Health and Welfare Officers found a flock of Jacob sheep with fleeces still unshorn during a visit to Swn-y-Mor in Wick despite it being late into the summer.

Several sheep carcasses were also found at the site and upon closer inspection it emerged that a number of the remaining sheep were suffering from the effects of maggots and associated wounds.

Then, in January last year, Animal Health and Welfare Officers found horses in appalling conditions at sites in Bonvilston, Coity and again at Swn-y-Mor.

They were found standing in extremely deep mud, there was a lack of clean fresh water, and some had no forage. Two of the sites were strewn with hazards such as sharp metal and barbed wire, and at one site the horses were kept in overcrowded, filthy conditions with nowhere for them to lie down.

Price was charged with causing unnecessary suffering in relation to eight horses, some of which were significantly underweight, while others had long-standing wounds caused by ill-fitting rugs.

Officers were left with no choice but to seize horses from across the three locations.

Dave Holland, Head of Shared Regulatory Services, said: “Not only do Price’s practices harm animals, they also cause problems for the wider communities as animals were often allowed to stray or fly-graze on land that he did not own.

“This conviction follows many months of partnership working between local authorities, South Wales Police, Redwings and the RSPCA. Having to seize and care for animals on this scale has been extremely costly, but those that keep animals should be left in no doubt that these are steps we are prepared to take to ensure animals receive the appropriate level of care.”