"The most rewarding horse I've ever ridden!" 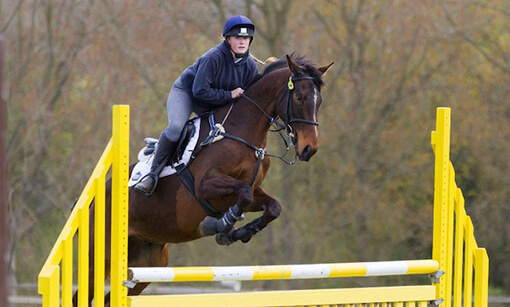 Here at Redwings we love it when we hear from our Guardians. Lots of them have been sharing photos with us for our #HoovesOfHappiness feature on social media, and we have loved sharing their heartwarming photos and updates with you.

Now it's the turn of Redwings Larry and his Guardian Jess who told us all about their life together.

Thirteen-year-old Irish Sports Horse Larry came to Redwings as a youngster in 2010 from the Irish Horse Welfare Trust (IHWT). Originally rescued in 2009, Larry was one of a large group of horses who were being kept in poor conditions and were almost completely unhandled. Many were emaciated, with very large worm burdens.

Redwings had previously worked with the IHWT and assisted them with their limited capacity by offering homes to equines in their care. By Redwings offering homes to these horses, the IHWT can then continue their vital frontline work in Ireland.

Guardian Jess rehomed Larry later in 2010 and describes: “I have had Larry on the Guardianship scheme since he was two years old. We spent a lot of time very slowly backing him and spending time together and now at the age of 13, he has turned his hoof to nearly everything and he is the most rewarding horse I have ever ridden! We have done a bit of everything together, but cross country is his favourite as he is so bold and eager and enjoys himself so much!

“We had our proudest moment together competing at a cross country event. After some time off for Larry, and a confidence knock for me with another horse we went to a cross country event. I had been due to take my other horse, but something told me to take Larry and I am so glad I did. He gave me the most amazing clear round, so much so that I started crying over the last few jumps as I was so so proud of him and the fact he looked after me. My confidence shot straight back up to the top – I’ll never forget that feeling!"

Jess also told us: “Larry has the best personality and a sense of humour! He is kind to all the other animals and people on our yard – anyone that visits our field falls in love with him instantly as he is such a character, he certainly stands out in our herd.

“I really do adore him!”