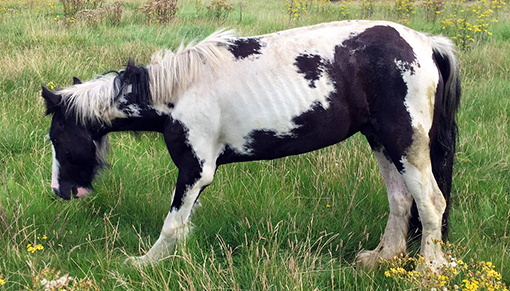 We're very sad to announce that critically ill mare Raggy, who was found abandoned in Harlow last month, has lost her fight for life.

The piebald cob, named Raggy by her rescuers, was discovered at the derelict Passmores School site on Wednesday 23rd August.

Raggy, who was believed to be four years old, was found very underweight and was in such pain from severe laminitis - a condition affecting a horse’s feet - that she was rooted to the spot. Upsettingly, Raggy also had an udder full of milk indicating she may have recently lost her foal or had her foal removed from her.

She was taken to House and Jackson’s Horse Clinic for emergency treatment funded by Redwings and the RSPCA, but despite the best efforts of the vets her condition deteriorated and the heart-breaking decision was made to put her to sleep on Wednesday 6th September.

Our appeal for information about Raggy’s background was met on social media with a flood of well wishes for the sweet-natured mare, and we would like to thank everyone for their support since her rescue and continue to urge anyone with information to come forward.

Our Senior Welfare Officer Jo Franklin, who first attended Raggy alongside an RSPCA inspector and a community park warden, said: “Due to the severity of her condition, the outlook for poor Raggy was very uncertain from the start but we were determined not to give up on her.

“The vets did everything they could to give her the best chance of pulling through, but sadly she was just too ill. Raggy’s condition took a turn for the worst on Wednesday when even simply standing up became too much for her and it was decided that the kindest thing to do would be to put her to sleep.”

Redwings’ Chief Executive Lynn Cutress, added: “We’re terribly sad to have lost Raggy but can take comfort that she spent her last days in a calm and caring environment and not alone in a field where she had been so cruelly abandoned. The outpouring of well wishes for this young mare has also been incredibly touching.

“We had pledged to do everything we could for her, and while we can no longer offer Raggy a home, we will continue to appeal in her name for information. Thank you to everyone who has contacted us or the RSPCA so far.”

RSPCA Chief Inspector Samantha Garvey, said: "We are so sad that poor Raggy lost her fight for life, the RSPCA had worked with Redwings to give her the best chance we could of survival. Sadly Raggy was just another example of an irresponsible owner abandoning their sick or injured horse to die alone and leaving someone else to deal with it.

"We still want to find the person responsible for dumping Raggy, and as we believe Raggy recently had a foal, we desperately want to know how the foal is doing as we are concerned for their welfare. So if anyone who can provide any information is urged to call the RSPCA or Redwings on the appeal numbers below."

Help us help horses in need, thank you