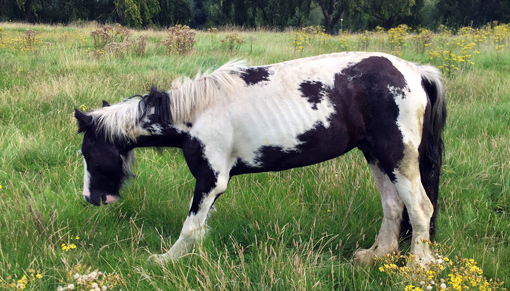 We are appealing for information about an abandoned mare found suffering from severe laminitis – a painful and potentially fatal condition affecting a horse’s feet.

The piebald cob mare, Raggy – so named by her rescuers – is estimated to be four years old and was found at the derelict Passmores School site in Harlow on Wednesday 23rd August.

The mare was attended to by our Senior Welfare Officer Jo Franklin, together with an RSPCA inspector and a community park warden, following a welfare report from a member of the public. Commenting on her findings, Jo said: “Sadly, it is highly likely the mare was abandoned due to the severity of her condition; she was in such pain that she was rooted to the spot, unable to move.

“At this stage the cause of her laminitis is unclear. The condition is usually associated with obesity or hoof issues, but Raggy is actually very underweight at a body condition score of just 1 out of 5 and she doesn’t appear to be suffering from any hoof abnormalities. Upsettingly, as well as being severely laminitic, Raggy also had an udder full of milk so I can only assume she had recently lost a foal or had her foal recently removed from her.”

Similarly, Chief Inspector Samantha Garvey said: "This is yet again another example of an irresponsible owner abandoning their sick and injured horse to die alone and leaving it to someone else to deal with.

"This mare was so poorly she was unable to move and alarmingly she was producing milk which means she must have recently had a foal. We would urge anyone who has any information regarding who owned the mare to get in touch. We would also really like to find out if she has had a foal how the foal is doing now as we are also concerned for their welfare and want to check that they are okay.”

An abandonment notice has been issued for Raggy and she is currently receiving treatment at House and Jackson’s Horse Clinic with investigations as to the cause of her laminitis ongoing. 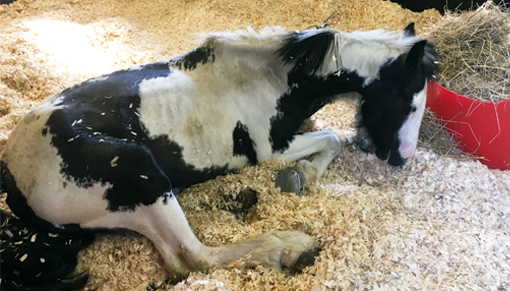 Our Chief Executive Lynn Cutress said: “We’re very concerned about poor Raggy and we have pledged to do everything we can to help her by funding her veterinary treatment and offering her a home should no owner come forward.

“Sadly the outlook for this sweet-natured mare is currently very uncertain, so we are urging anyone with information to contact our welfare team or the RSPCA.”

Help us help horses in need, thank you.